The original Final Fantasy Tactics is one of my all-time favourite games for its mix of deep strategic gameplay and clever, politics and religion-focused storytelling.

Therefore, you can see why I was ecstatic when Square Enix unveiled Triangle Strategy, developer Artdink’s spiritual successor to Tactics with a gorgeous coat of “HD-2D” paint in the vein of producer Tomoya Asano’s other game, Octopath Traveler.

Now that I’ve had two weeks with the surprisingly dense Triangle Strategy, I can say that it’s an overall worthy addition to the strategy genre that scratches the Tactics itch quite nicely.

One of the main issues holding Triangle Strategy back, however, is apparent right from the start: the pacing. As soon as you boot up the game, you’re greeted with narration setting up the premise. The game takes place in the continent of Norzelia, in which three kingdoms — Glenbrook, Aesfrost, and Hyzante — once fought over resources but have since formed an uneasy alliance. To further unite the people, Glenbrook noble Serenoa is set to marry Aesfrost princess Frederica, before a new conflict threatens the lands and drags them all into its centre.

Now, that’s the CliffsNotes version; it’ll take quite a while for that to all unfold in-game. That’s because Triangle Strategy has an incredibly plodding opening stretch that makes it difficult to get into, replete with lengthy cutscenes and woefully stilted voice acting. It doesn’t help that many side events just consist of more people talking. For context, in the span of the first nearly two-and-a-half hours, I encountered just a single battle: the tutorial. As someone who grew up on original PlayStation JRPGs like the Final Fantasy series, or even modern games like Fire Emblem: Three Houses and Persona 5, I’m no stranger to dialogue-heavy games, but those, at least, feature a better mix of cutscenes and gameplay. 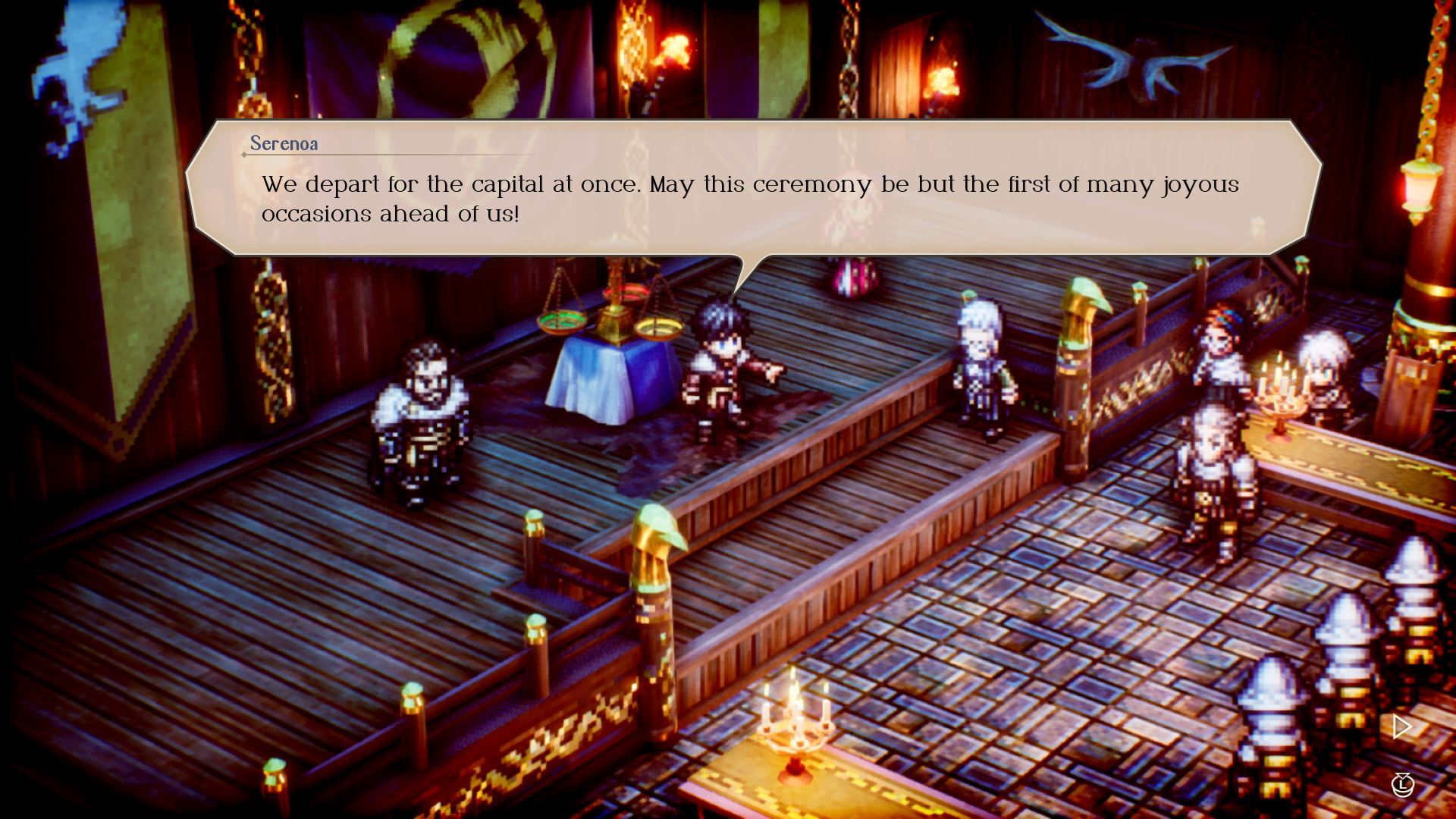 While Triangle Strategy never quite manages to strike that balance, your patience with the game will nonetheless be rewarded as you slowly unravel its rich narrative. Nowadays, anything that features a fantasy-based setting with warring classes will inevitably be compared to Game of Thrones, but that’s actually appropriate here, and not just in a surface-level way. While the main cast is somewhat bland, there’s a surprising amount of nuance to the supporting cast, creating a complex central conflict that actually challenges you with tough, morally grey quandaries.

Nowhere is that more apparent than the ‘Scales of Conviction’ system, Triangle Strategy‘s approach to story-altering player choices. Rather brilliantly, key decisions that Serenoa has to make must be agreed upon by the majority of the party. What this means is that coming to a decision yourself is only half the battle: you have to actually try to convince your allies through dialogue. It’s a remarkably smart way to involve the entire party while rewarding you for understanding their points of view and trying to appeal to them accordingly. When compared to Triangle Strategy, which made the baffling choice to makes each character’s story disconnected from one another, the Scales of Conviction system is all the more engrossing. These all have a tangible impact not just on the inevitable endings you get, but the various level and combat beats that you hit on the path to them. 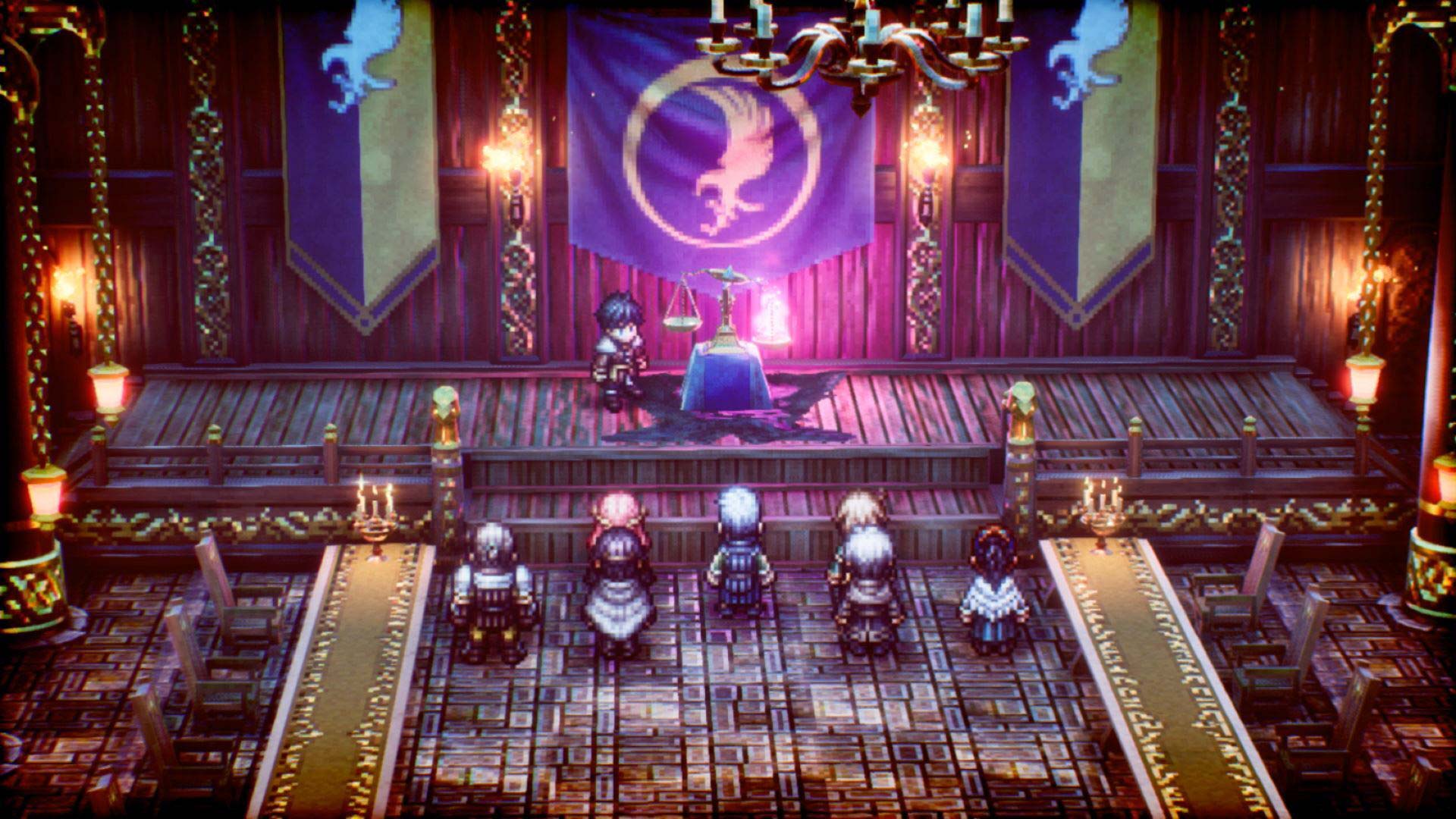 Where Triangle Strategy isn’t quite as innovative is in its core strategy combat, but that’s also not a bad thing at all. On the contrary: it’s tried-and-true Tactics-style turn-based combat in all of its glory. In other words, you’ll be using various class-based units, ranging from heavy-hitting sword users to more nimble mounted knights and spellcasters. They’re pretty standard, admittedly, as is their progression systems, but it’s through that simplicity that Ardink creates rock-solid, engaging battles. If it ain’t broke, don’t fix it.

And that’s not to say that Triangle Strategy doesn’t offer a few fun wrinkles of its own. Firstly, the game’s grid-based terrains grow increasingly intricate and varied over the campaign, featuring different altitudes and hazards that shake up the flow of battle quite nicely. For example, striking an enemy standing on a puddle with a lightning-based spell will deal extra damage. You’ll also want to consider positioning; placing units on either side of an enemy means that attacking with one with have the other perform a follow-up strike. Both you and the enemy can do this, so you have to keep this in mind lest you send a weaker unit off to get ambushed. 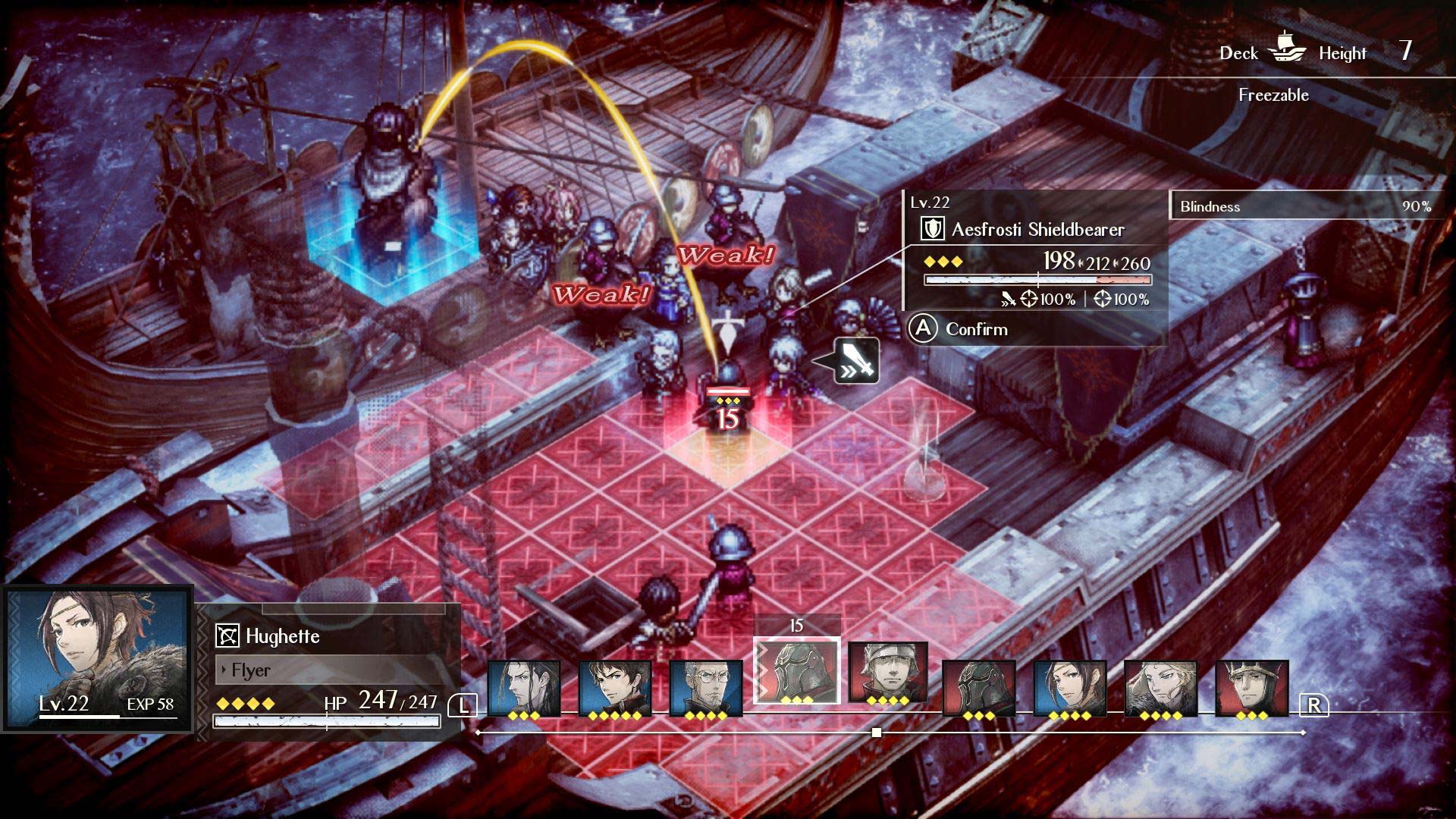 At the same time, Triangle Strategy feels more approachable than other strategy games for a number of reasons. Chief among these: no Permadeath, so units who are defeated will only remain unavailable for that battle. This serves to simultaneously remove some of the stress while allowing the developers to control when characters die to fit the narrative. Further, Triangle Strategy allows you to retreat from battles to restart them while retaining all accrued XP. While some might think that makes things easy, I appreciate how this cuts back on grinding and doesn’t make you feel like you’ve hit a complete wall, since you’re still progressing through trial-and-error. Concurrently, battles are exceptionally well-balanced, with battles feeling sufficiently — but never overly — difficult.

Ultimately, then, Triangle Strategy‘s real challenge lies in its difficult moral choices. There’s no “easy” or “right” path to take, and you’ll often feel conflicted regardless of what you decide on. Rarely do games with “branching narratives” achieve such a feeling, and Triangle Strategy is all the better for it. It might take some time to get there, and you’ll suffer through sometimes rote dialogue and often-wooden voice acting along the way, but the journey is definitely worth it.

Triangle Strategy is now available exclusively on the Nintendo Switch. The game can be purchased on Amazon for $79.99. It’s worth noting that a meaty free demo, which allows you to carry over your progress to the full game, is also up on the eShop.

MobileSyrup utilizes affiliate partnerships. These partnerships do not influence our editorial content, though we may earn a commission on purchases made via these links that helps fund the journalism provided free on our website.