The most versatile wireless earbud case


The LG Tone Free FP9 earbuds sit at the top of LG’s wireless earbud lineup, and they don’t disappoint.

They’re comfortable, and the sound quality is fine. However, there are still some areas that LG stands to improve in, like microphone quality and the omission of headline-grabbing features like Dolby Atmos.

The South Korean tech giant has also added a collection of unique features that might seem like gimmicks to some, or make these wireless earbuds a ‘must-buy’ for others. 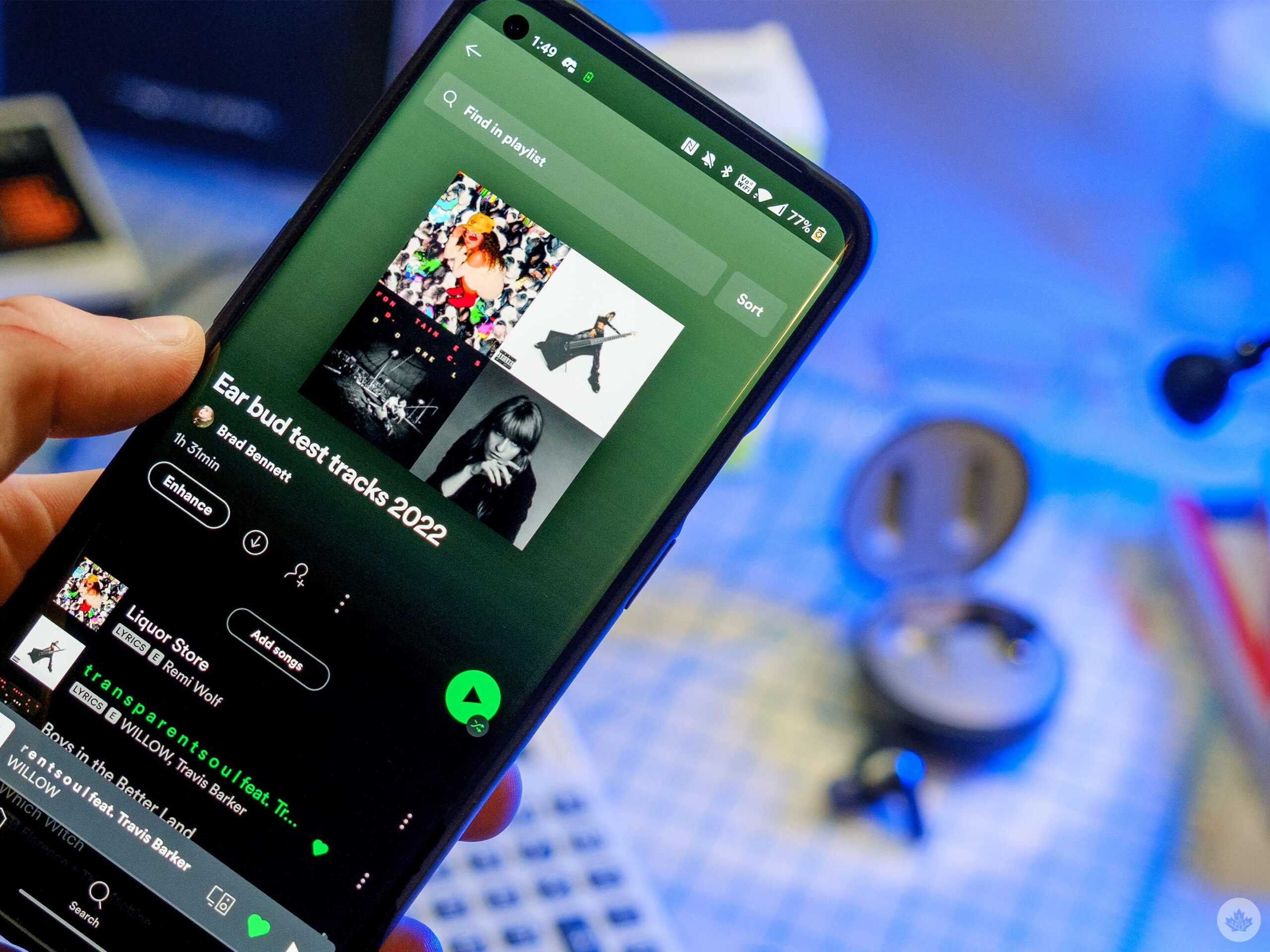 So this is a bit unorthodox, but below are some of the tracks I listened to while testing out the Tone Free FP9 earbuds.

None of the songs are selected for a specific sonic reason, but instead, I tried to capture a wide range of genres. These are songs I like and listen to a lot, giving me a decent point of context to compare the earbuds with. 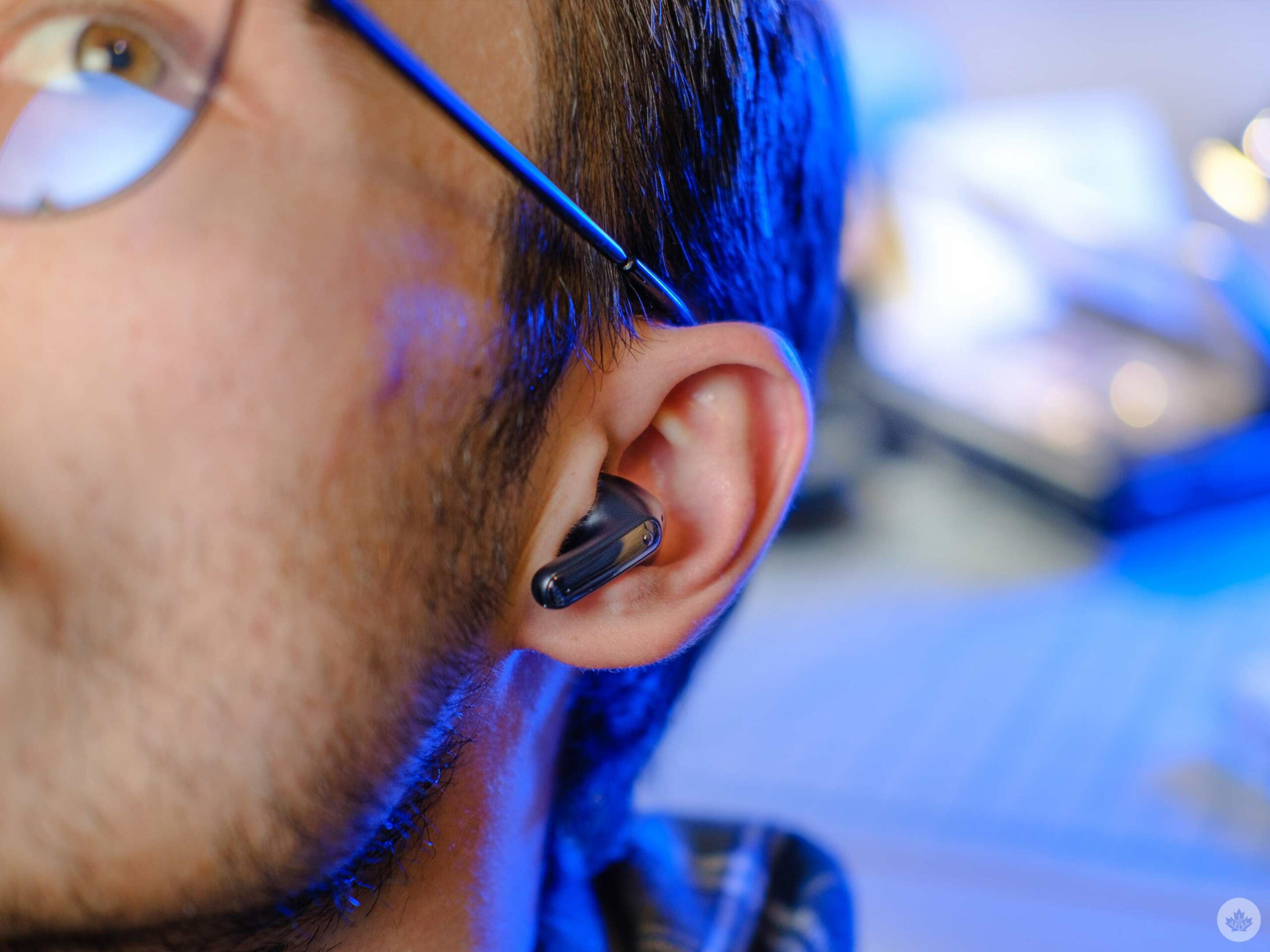 The first time I put the LG FP9s in my ears was while I was also testing the OnePlus Buds Z2. Though I wasn’t expecting the sound to be as immersive as OnePlus’ latest offering since LG’s buds lack Dolby Atmos, they still shocked me with their wide soundscape. 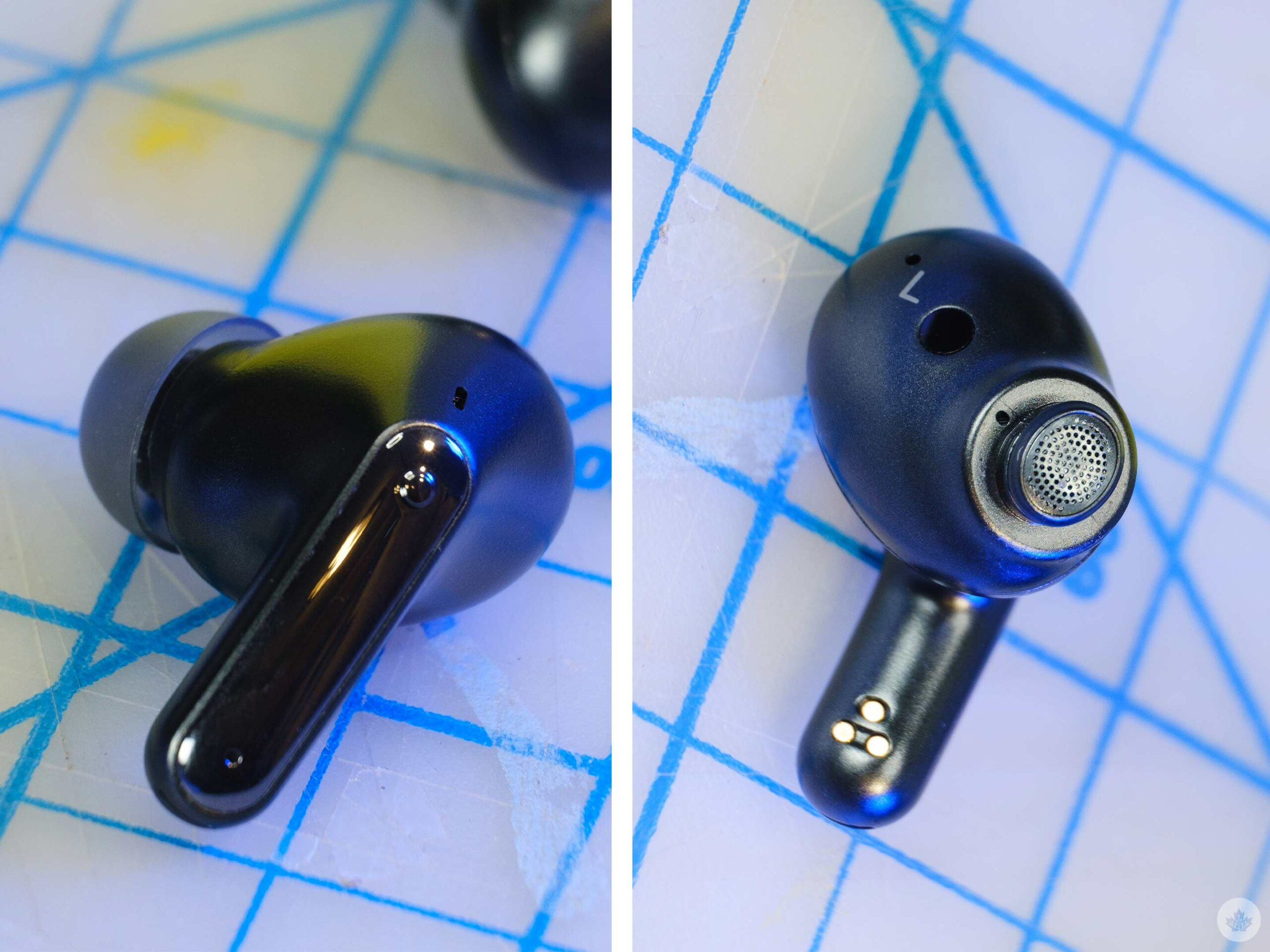 LG hasn’t shared how large the tiny buds’ drivers are, but the FP9’s sound a little limited once the volume is above 85 percent. This isn’t something I think most people will notice, but if you like to listen to music loud, you’ll quickly hit a ceiling with these.

Diving a bit deeper, I discovered that LG and British speaker maker Meridian tuned these earbuds with an EQ they call ‘Immersive.’ Through the Tone Free FP9’s companion app, you can tweak this setting to ‘Natural,’ ‘3D Sound Stage,’ ‘Treble Boost’ and ‘Bass Boost.’

After trying out the different settings I stuck with Immersive since it helped me get lost in the music a little more, but Natural is also a great option for regular listening. You can tweak your own EQ profile if you’d rather, and LG allows you to save two custom pre-sets in the app. 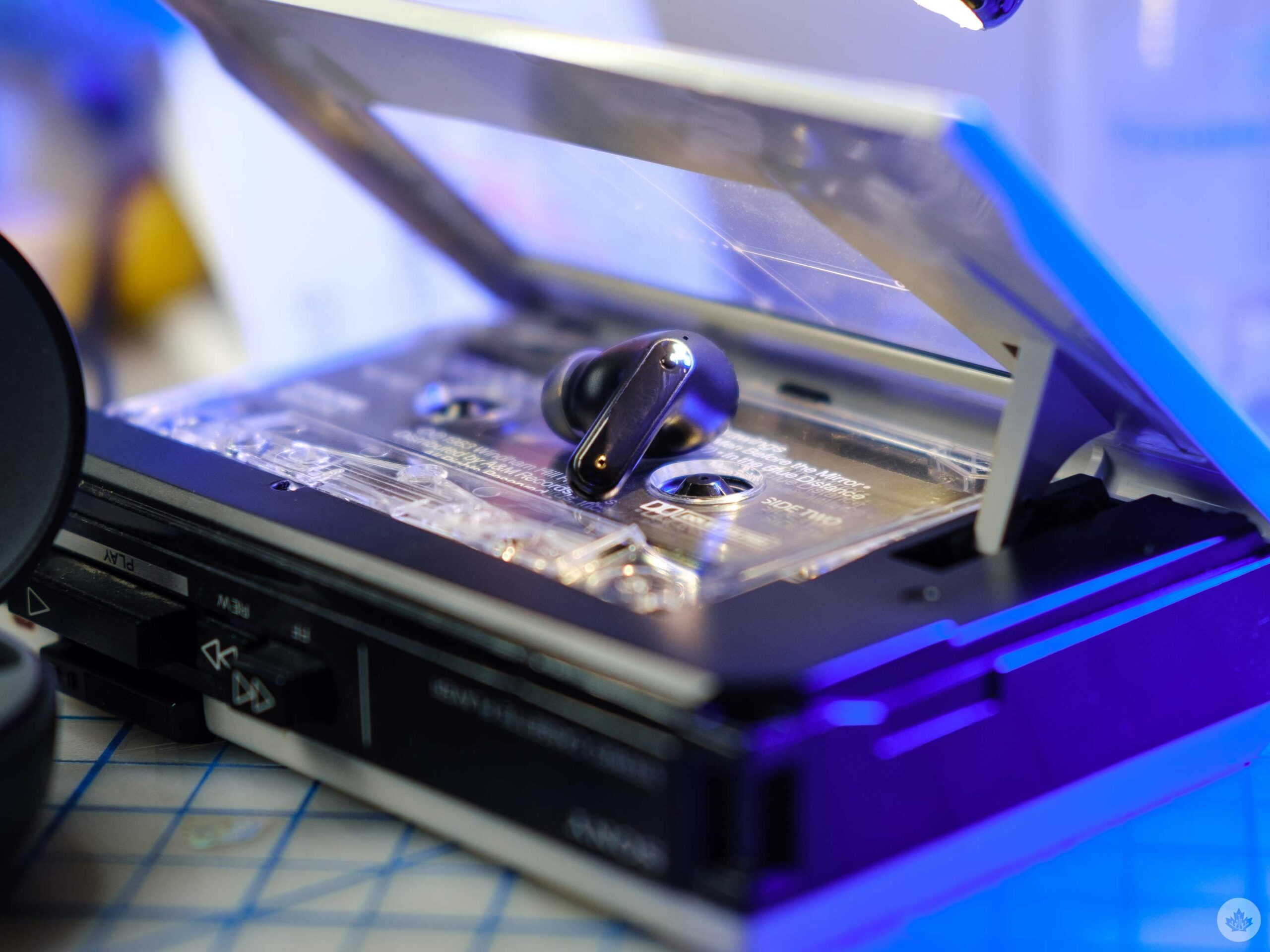 LG also offers an active noise-cancelling (ANC) mode with the FP9s, which I found really great. It’s maybe not as good as Apple’s new Beats Fit Pro, but better than anything OnePlus has done. Combining that with the Immersive sound profile and my favourite tracks created a pretty great combination. Of course, it’s also got a transparency mode, and you can turn off ANC if you want.

On iOS, the LG app only allows you to select one version of ANC, but on Android, there are two strengths depending if you want full noise-cancelling or just a bit to help drown out the background a little.

If you plan to use the Free FP9s to make many calls, they’re passable, but If you listened to the video above, you know that they’re not the best, especially for the price. 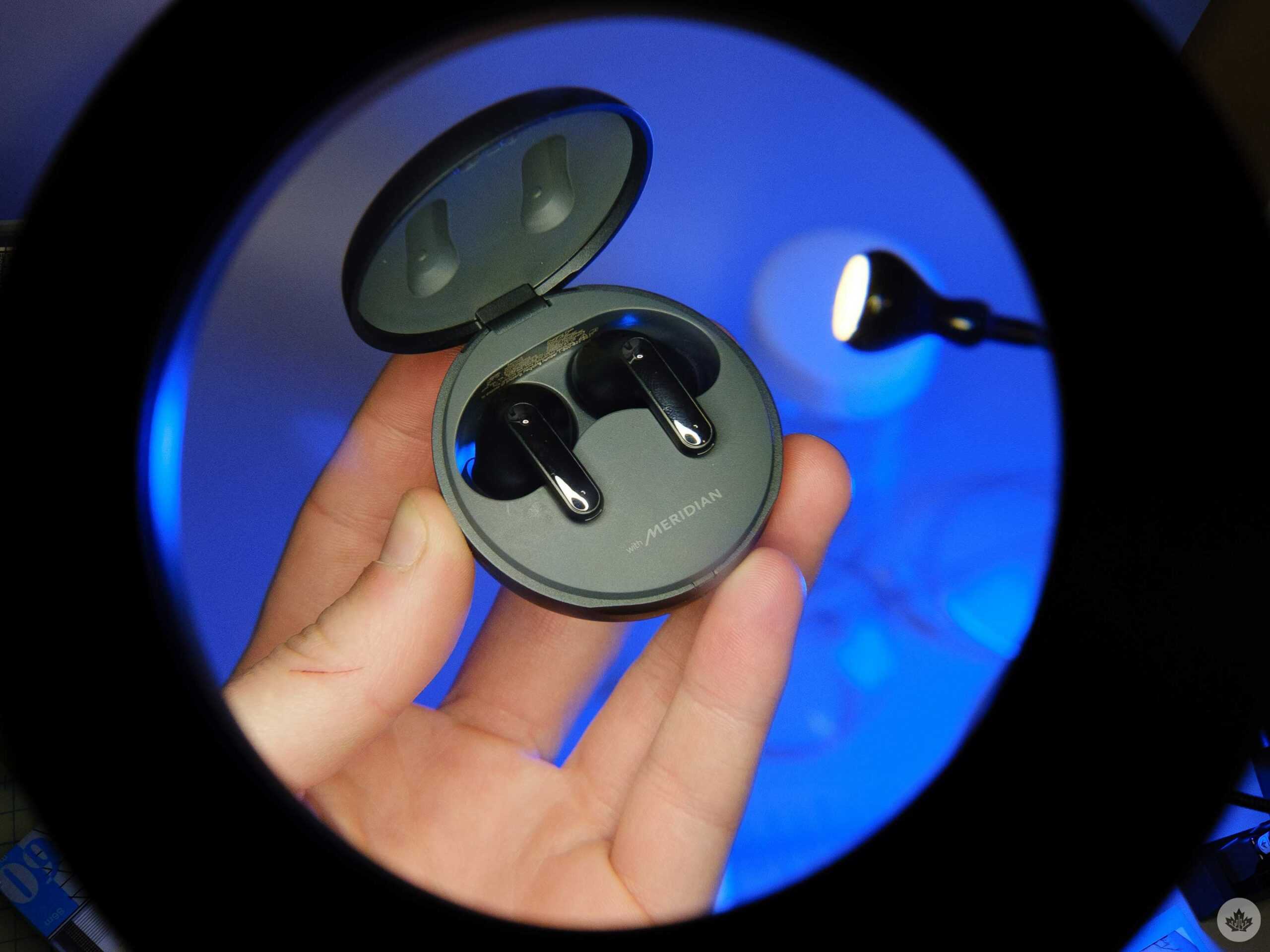 The LG Tone Free FP9’s design can be summed up in one word: compact. From the charging case to the buds themselves, this is a small pair of wireless earbuds. The smooth touch plastic that the company used on the case even makes it feel soft in my hand like a small river stone.

Each earbud is small and offers the same matte plastic design as the case, but LG decided to put a glossier strip on the outside to signify where the play/pause controls are located. Overall though, the buds are tiny, and I like the short stem design. It gives the buds a nice balance, and they feel secure in my ears.

Combining that with the small size means these buds can nestle in your ears nicely. I’d feel confident jogging with them, but I might suggest looking for something with an over-ear hook like the Power Beats Pros for more active users.

LG says that the ear tips are created using medical-grade silicone, and while they felt nice to wear, they turned inside out almost every time I took them out of my ears. There are the usual small/medium/large ear tips included with the buds. 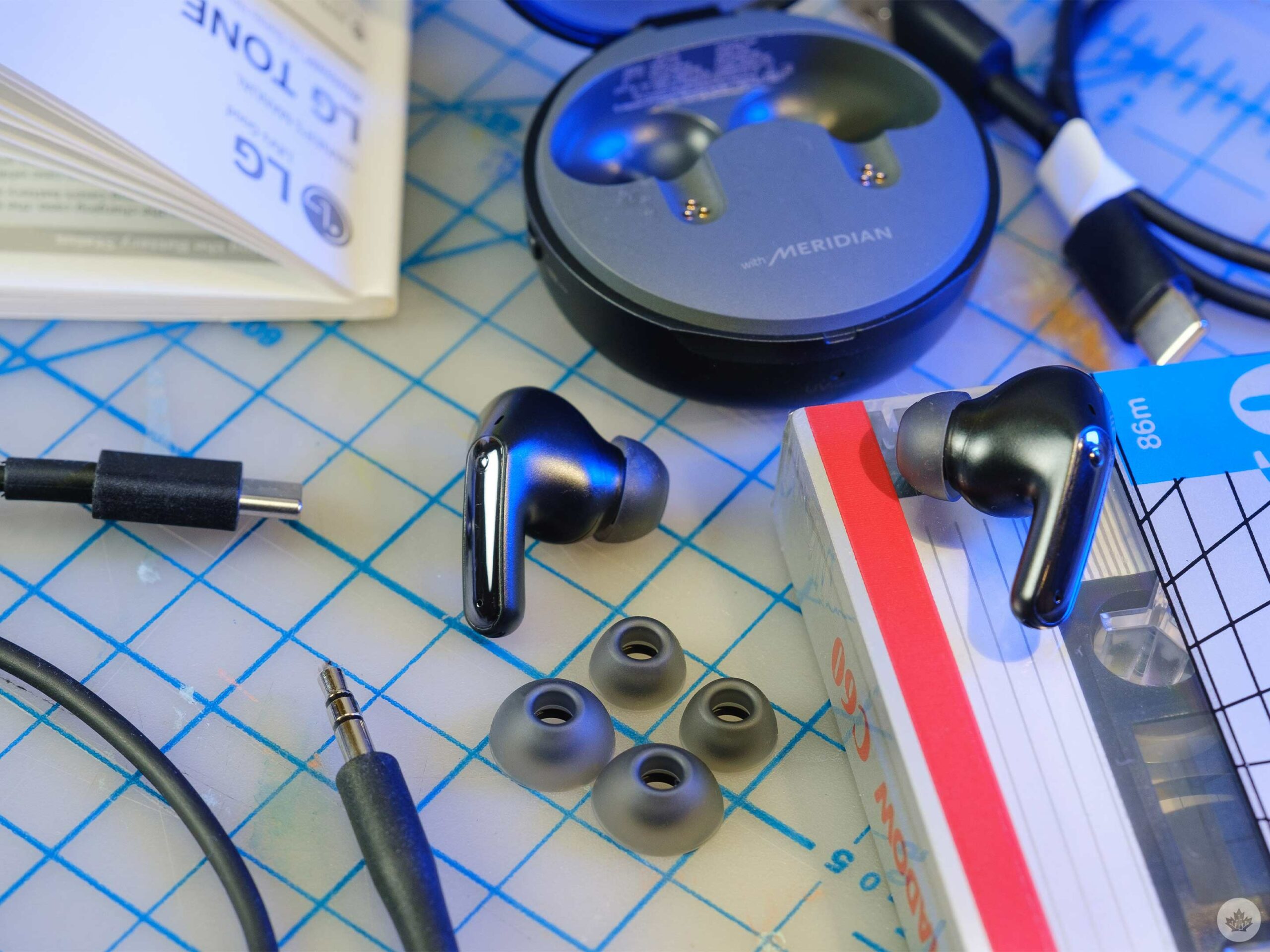 The quirks are really what sets these earbuds apart from the competition. Given most Bluetooth earbuds sound good, but rarely outstandingly great, this isn’t really the fault of the FP9s — it’s just the nature of Bluetooth technology.

The first and most apparent notable feature is the earbuds’ case has a UV-C light built in it so when the earbuds are charging, they’re bathed with UV that aims to render them bacteria-free. These aren’t the first LG earbuds to feature this functionality, but it’s still neat and can kill 99.9 percent of escherichia coli, staphylococcus aureus and klebsiella pneumonia bacteria on the earbuds’ speaker mesh if it runs for five minutes, according to LG’s website. 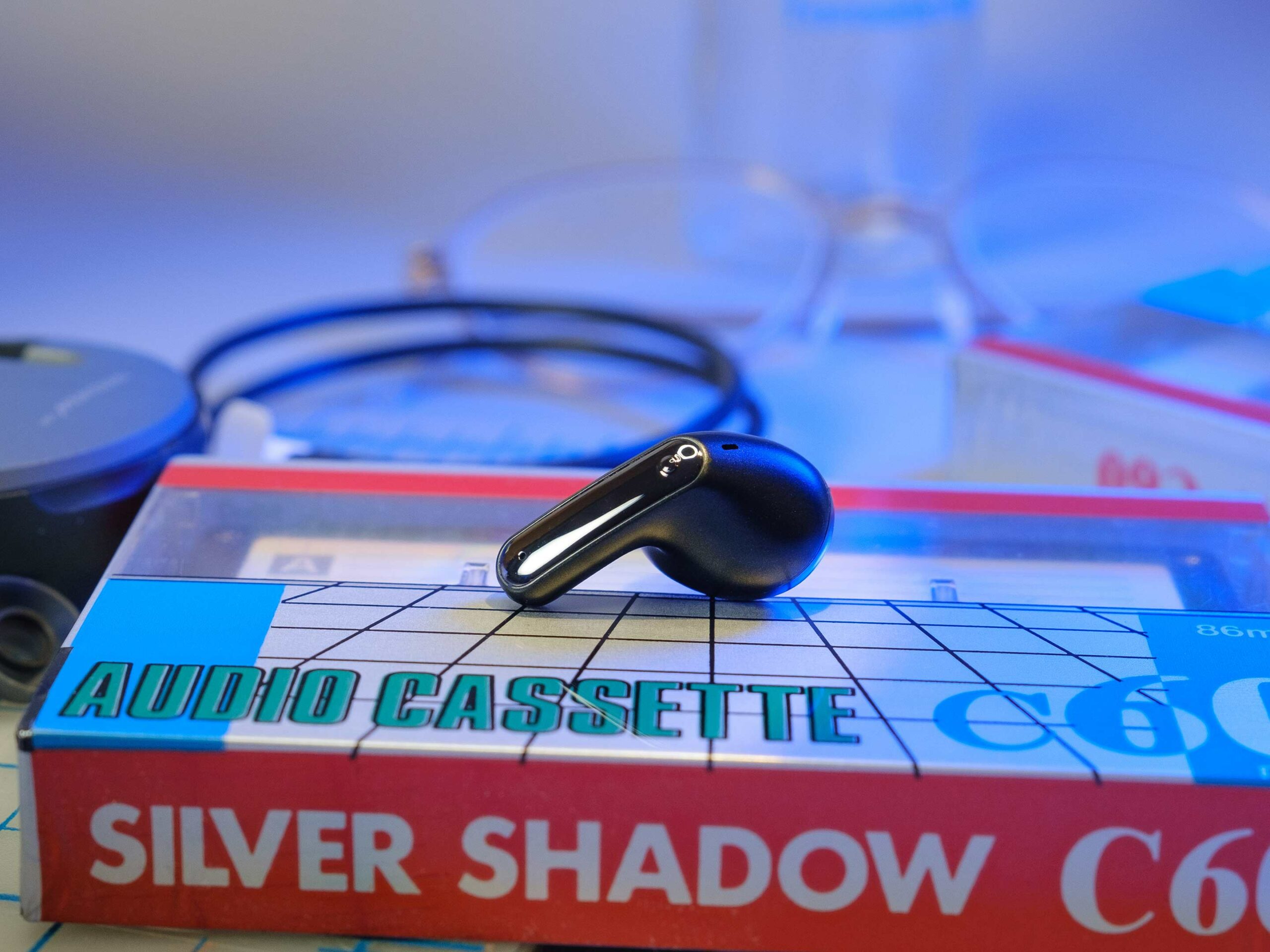 The company also notes that the soft blue light that illuminates the earbuds when you open the case isn’t UV, invisible to humans. Instead, it’s just for aesthetics.

Quirk number two appeals to me a lot more. The buds come with a USB-C to AUX cable in the box that allows you to use the charging case as a wireless transmitter for sound. This means you can plug the case into old radios, vinyl turntables and more to use the earbuds wirelessly with older devices or even on a plane. It’s a niche scenario but handy nonetheless. If this appeals to you, there are cheaper LG earbuds that also include this functionality. 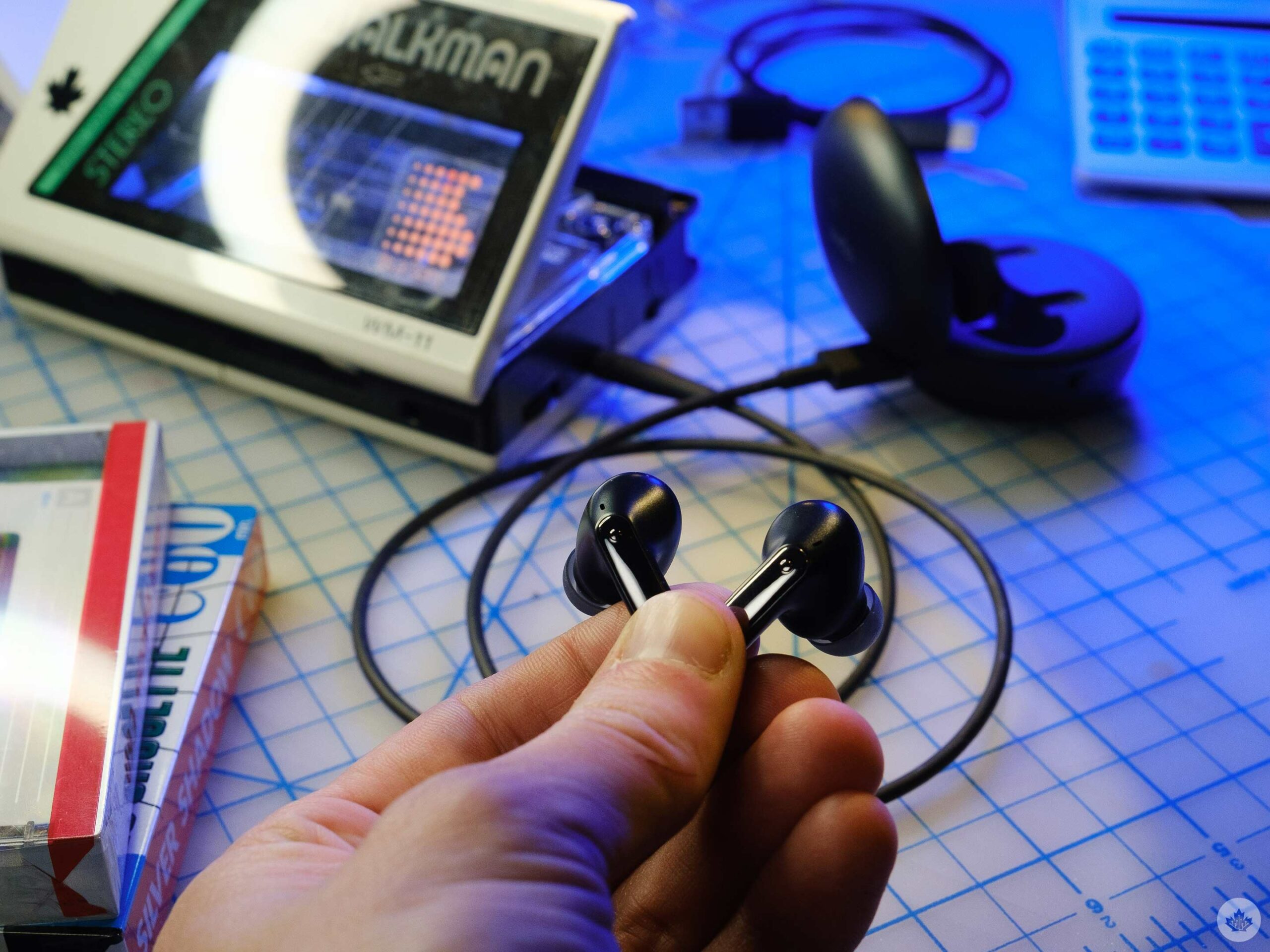 ‘Whisper mode’ is one of the FP9s weirder features and makes late-night phone calls a little more stealthy. If you want to enable the feature, you need to turn it on in the LG Free app. It’s buried under the ‘Tone Free Lab’ heading, but it allows you to use the right earbud as a tiny microphone near your mouth.

You need to actually whisper into the mic since LG boosts the gain given it’s meant to be used quietly. This is a brilliant feature and I wish LG didn’t bury it so deeply in the menus. 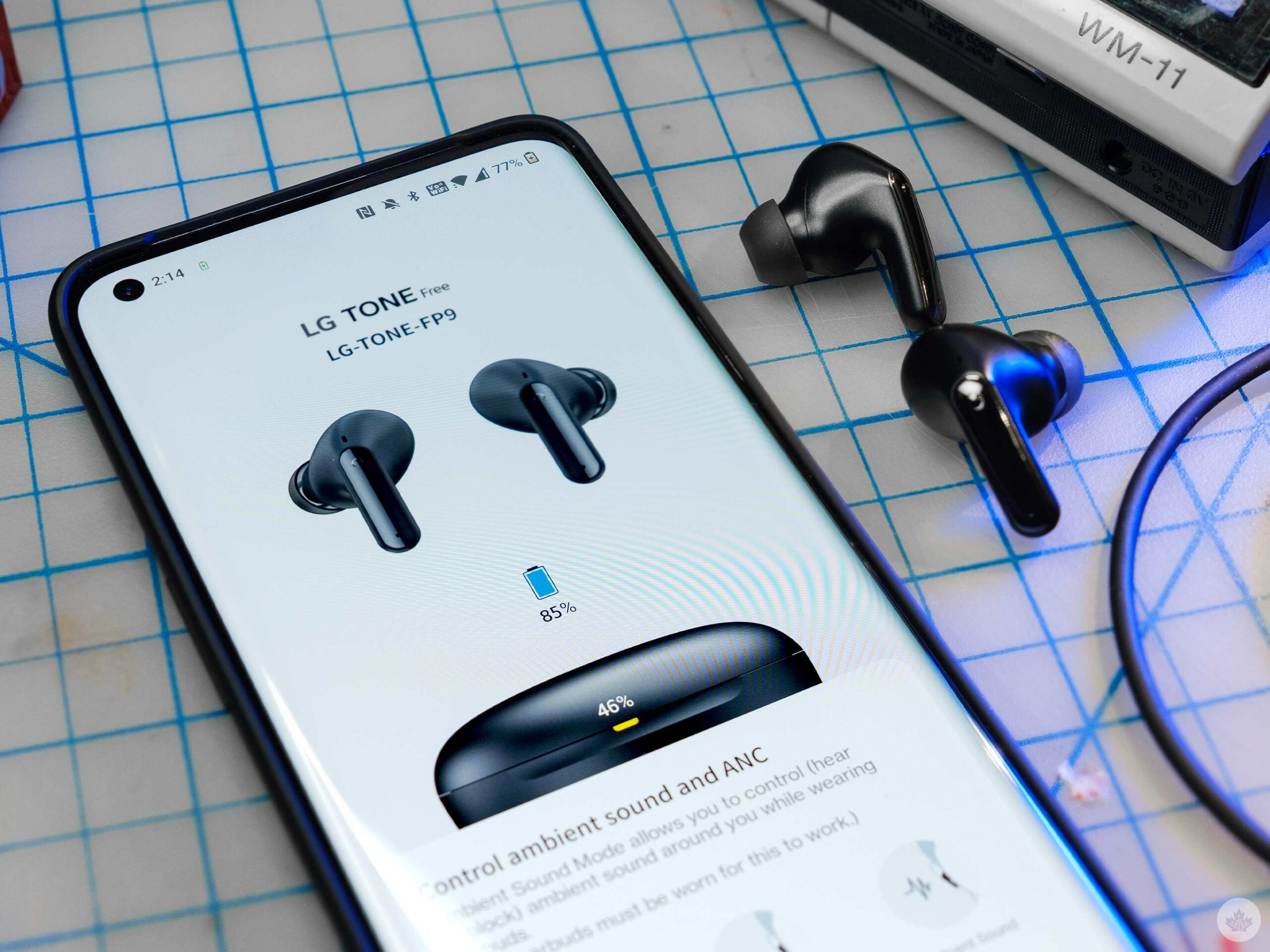 The LG Tone Free app is one of the more feature-packed earbud companion apps I’ve used.

Its UI is very straightforward, allowing you to scroll through the earbuds’ various settings without needing to pop into any menus. The app starts with the EQ settings and then controls active noise-cancelling.

Below that is the ‘Tone Free Lab’ where you can turn on ‘Whisper mode.’ ‘Game mode’ is also under here, which aims to reduce the latency of the earbuds for fast-action gaming.

Moving back to the home page, there’s an auto-play/pause toggle that stops the music from playing when you take an earbud out, but it kept turning off every time I stopped using the earbuds with an iPhone. If I turned it on in the app at the beginning of a listening session, it would work that entire time flawlessly, but it reverted once the buds went back into the case. I assume this is a bug and, hopefully, LG will address it in future updates. 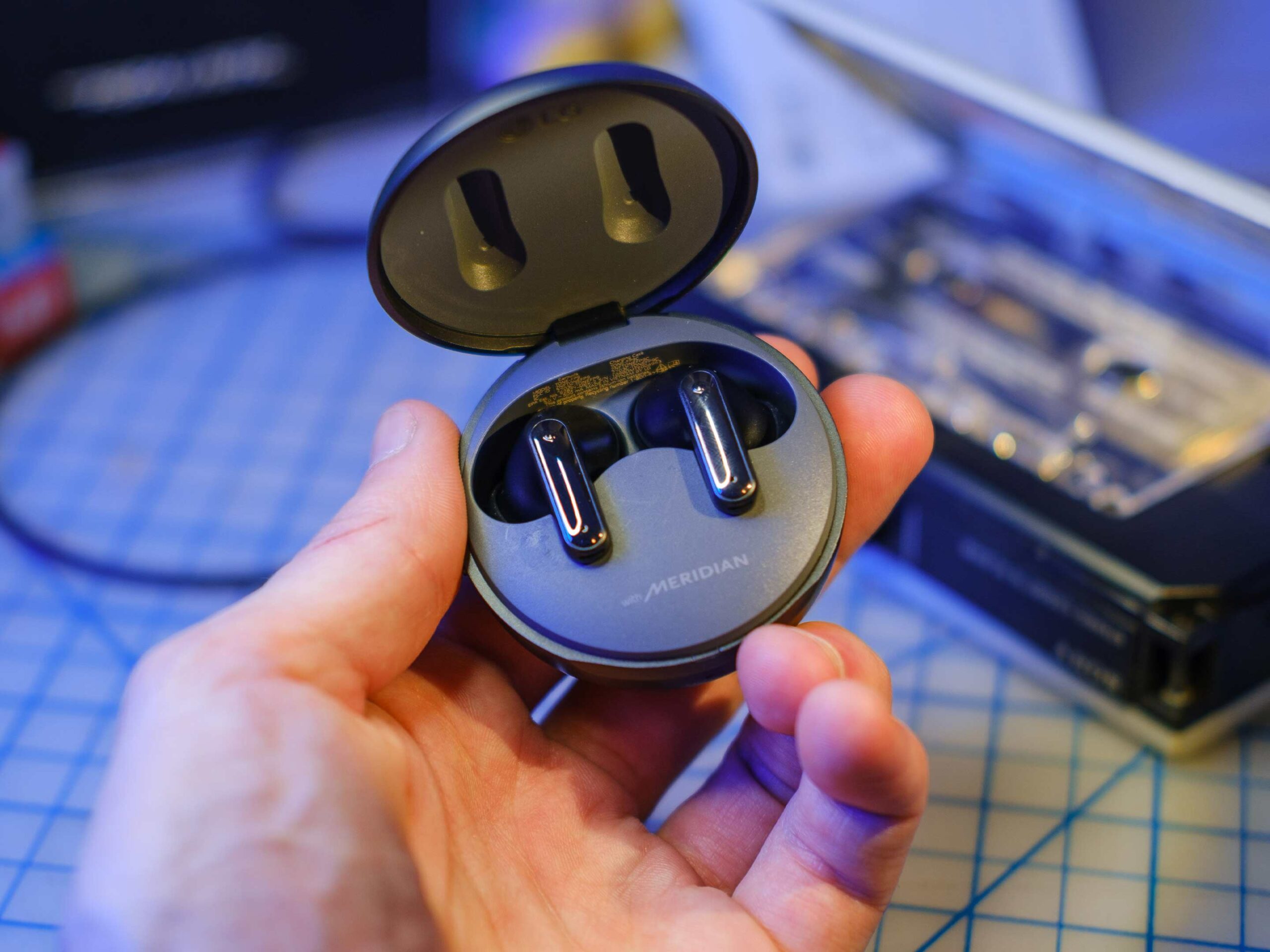 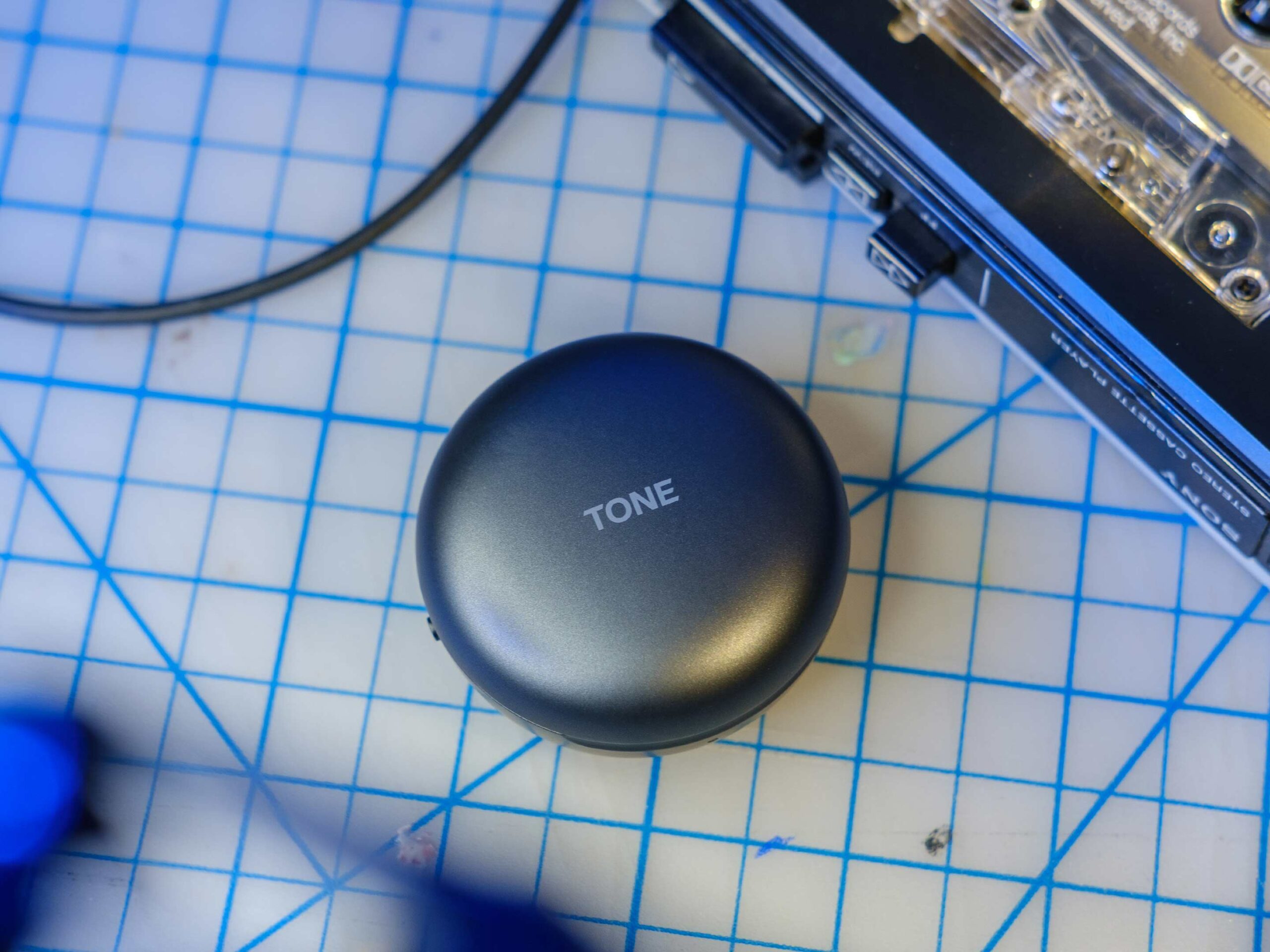 Alongside this issue, the app also fails to load if the buds disconnect while in use. This means that if I started using the buds and wanted to dive into the app, I needed to force quit and reopen since it’s not intelligent enough to re-pair to the buds. I found more success with the Android version of the app.

Finally, you can also turn on a feature to read incoming messages, lock or customize the touchpads, read the manual or use the app to play a sound from the buds if you misplaced them and they’re still in Bluetooth range.

This exclusive launch team Stadia controller is listed on eBay until Feb. 7

How R&B Singer H.E.R. Learned to Love her Curly Hair