Home » Blog » Technology » Stadia fans keep saying the platform has a future, but I’m still not seeing it
Technology

Stadia fans keep saying the platform has a future, but I’m still not seeing it


Earlier this week, Samsung revealed at the Consumer Electronics Show that the game streaming services Google Stadia and Nvidia GeForce Now are coming to its 2022 smart TVs.

It’s a pretty cool announcement, as it points to the slow advancement towards high-quality gaming experiences that don’t require expensive hardware to access. Being able to play games directly from your TV, no console or PC required? That’s neat!

But on the other hand, it raises the question: what even is the deal with Google Stadia right now? For some people, seeing Stadia in that announcement was likely akin to Obi-Wan Kenobi hearing his name for the first time in a while.

Naturally, then, MobileSyrup‘s Patrick O’Rourke made an offhand comment about Stadia’s relevancy when the CES news dropped. But immediately, multiple Stadia fans jumped on him. Now, fanboys are nothing new, and every platform has them. But I can at least understand (to a degree, of course — not condoning toxicity) one’s fanboyism for any of the other platforms. PlayStation, Xbox, Nintendo and PC, with their own respective strengths, are all in a pretty good place right now. Hardware and software sales back that up.

However, I truly don’t understand how these Stadia fans continuously attempt to argue that their platform of choice is doing so well. One commenter said Patrick was “ignoring the other developments for Stadia over the last year,” which multiple people liked. Yet, the only “evidence” of that from any of these people is that Google is hiring a few people in Stadia-related positions (as if the fact that Google looking to fill a few roles is at all equivalent to the long-term healthy future of a platform). So then, Stadia fans, I ask you sincerely: why are you so continuously bullish on the future of a platform that has really given you no reason to be so?

“If Stadia was truly “alive and well,” wouldn’t Google say anything about it?”

First and foremost: what data do you have? Google itself has declined to provide any actual info on how Stadia is performing, so we don’t know how many people are subscribed to the $11.99/month Pro membership or even using the free tier that only requires you to buy games à la carte. Generally, a company is loud when its products and services are doing well, and completely silent when it’s not. Remember how Sony pretended the Vita didn’t exist amid its failure, but wouldn’t stop boasting about the PS4’s massive successes? If Stadia was truly “alive and well,” wouldn’t Google say anything about it? Hell, the company didn’t even acknowledge the service during a two-hour keynote.

Stadia’s third-party partners don’t say how well their games do on the platform, either. Take Cyberpunk 2077, which got an unexpected player bump on Stadia when it launched in December 2020 because it was the least buggy version — CD Projekt just lumped Stadia sales in with “PC.” Per CD Projekt, 56 percent of sales within the first five months came from PC. The company’s CEO even laughed nervously when asked how much of the overall PC sales were accounted for by Stadia. Fans of Stadia can point to there now being 250-plus games on the platform as evidence that it’s receiving steady support, and sure, that’s a big step up from the lacklustre catalogue in the first several months. But getting notable 2021 games like Hitman 3, Resident Evil Village, Far Cry 6 and more means little if we don’t even know how many people are buying them.

At the end of the day, knowing how third-party games fare on Stadia is essential if you’re trying to argue the platform is doing well. After all, that’s is the only support it’s going to get. Because Google closed its first-party development division last February before it even put out a single game, it relies entirely on third parties now.

“I’ve seen some Stadia fans try to argue that there’s a media bias against the platform, which is silly since sites will always gravitate towards stories that garner the most readers.”

Not like the company has even been securing much in the way of exclusive third-party titles, though. In 2021, Stadia only received two exclusive titles, Hello Engineer and Pixeljunk Raiders, as well as two timed exclusives in Young Souls and Wavetale. No disrespect to the developers of these games, of course, but they aren’t the types of exclusive experiences that draw in swaths of people.

Without real sales data of any kind, we have to turn outside of Google. What we really only have to go off are February 2021 reports from Wired and Bloomberg, which expounded on the challenges the company faced in making games. The latter outlet even said Google “missed its targets for sales of controllers and monthly active users by hundreds of thousands,” despite paying “tens of millions” to secure games like Red Dead Redemption 2. Of course, the aforementioned Stadia fans will try to paint those reports as “outdated,” but if we haven’t heard any update since, how can you say things have improved?

There’s also the apparent relative lack of buzz among consumers. Of course, this sort of metric will always be anecdotal to a degree, but trying to look at it empirically, here’s what Google Trends says about searches for “Google Stadia” for 2021: 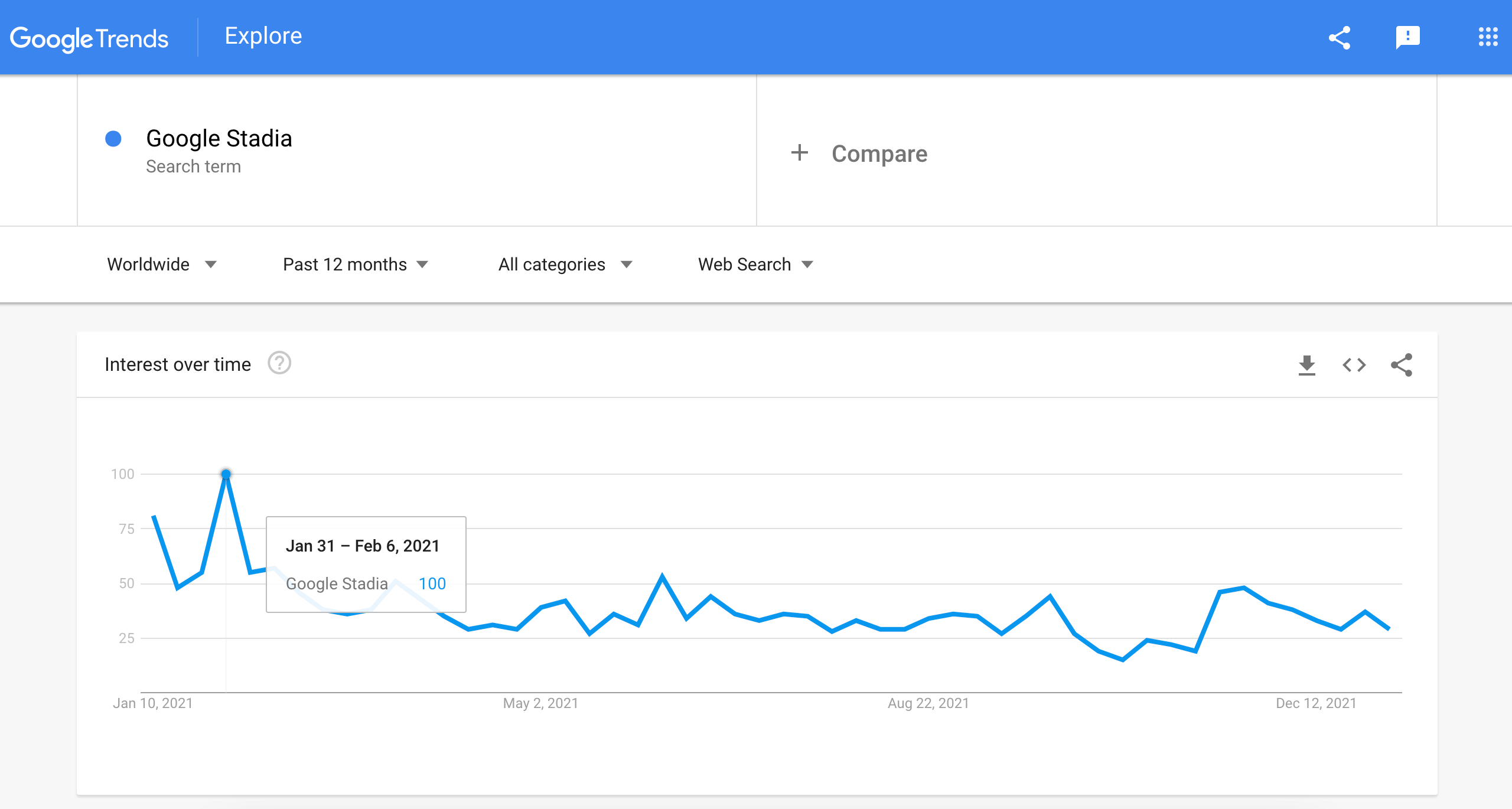 Per Google, a value of 100 means “peak popularity” for the search term, a value of 50 means “half as popular” and 0 means “not enough data.” Based on this chart, we saw interest rise in January, likely coming off of the platform’s deserved praise for being a top-tier Cyberpunk 2077 platform, and peak in the first week of February, right when the news of Stadia’s first-party closures dropped. From there, search interest has pretty much hovered around/below 50. Even search interest for the PlayStation 4 and Xbox One remained consistently higher in 2021 despite them being old hardware with hot new successors on the market.

Media coverage of Stadia has also been minimal since February 2021, especially amid the early months of the PlayStation 5 and Xbox Series X/S and the continued success of the Nintendo Switch. I’ve seen some Stadia fans try to argue that there’s a media bias against the platform, which is silly since sites will always gravitate towards stories that garner the most readers. That’s just common sense.

Now, some Stadia defenders might rule me off as “a hater,” but I’m not. I, too, was excited about Stadia in the months leading up to release. I still think the core technology is impressive, and the potential innovations cloud gaming can bring remain tantalizing. I always go back to examples floated around by Canadian games producer and former Stadia exec Jade Raymond, which include Stadia-powered interactive YouTube documentaries or Duplex-boosted NPC dialogue.

I don’t actively want Stadia to fail. I also know that for some, especially fathers, who like the relatively hardware-free convenience that Stadia affords. Hell, I’m bullish on cloud services in general in part for that reason, and I’ve praised both Xbox and PlayStation for taking more measured, complementary approaches to the technology that can be expanded upon over time. 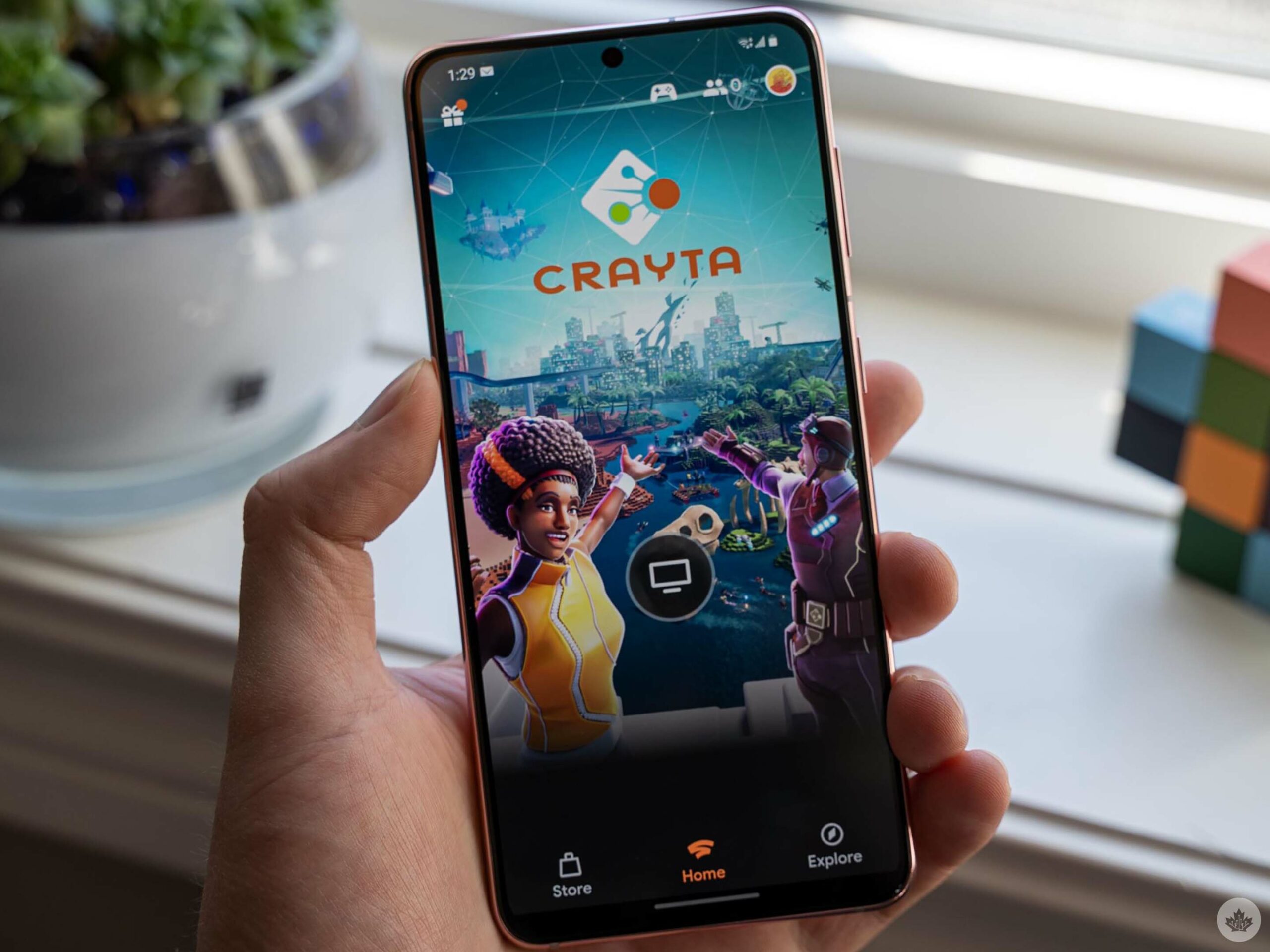 But at the same time, some people need to stop being so forgiving about Stadia. There’s this “woe, poor Stadia” mentality that these people seem to have, which is incredibly misguided. Google is one of the largest companies in the world — it isn’t your friend, and it isn’t some scrappy little indie startup.

Given its stature, it should be held to a higher standard than most. (The overall company, to be clear, not individual workers who are undoubtedly doing their best.) A major platform lacking something as basic as a search bar for a year-and-a-half (that’s owned and operated by the search engine company, no less) is, frankly, embarrassing. Potential only means something if you actually put in a marked effort to realize it, and it seems like Google’s been doing anything but.

Ultimately, if you’re someone who enjoys using Stadia, I don’t want to take that away from you. I really have no idea how many of you are out there since Google won’t say, but regardless, more power to you. As someone who owns all of the main three consoles and occasionally games on Mac as a substitute for PC, I truly have no allegiance to any particular brand. Play on whatever platform you like! And hey, I’d love to see Stadia somehow do a massive 180 this year. But I’m really not optimistic on the platform’s long-term future, and I’m still waiting to be given a real reason to be.

Elon Musk tweets Tesla FSD price will increase to $12,000 but only in U.S.