Uncharted: Legacy of Thieves Collection is a rather odd package.

As a bundle of PS5 remasters of the PS4 games Uncharted 4: A Thief’s End and standalone expansion Uncharted: The Lost Legacy, it only features the two most recent installments in Naughty Dog’s nearly 15-year-old action-adventure series. Consequently, it’s not exactly the best entry point for newcomers, especially considering that it’s releasing around the same time as February’s Tom Holland-led Uncharted film.

If that doesn’t bother you, though, or if you’re a series veteran who just wants to revisit two seminal PS4 titles, then you’ll certainly find a lot to enjoy with Legacy of Thieves Collection.

A satisfying end, and a promising new beginning?

For those who arenew to the series, Uncharted follows the lovable, wise-cracking adventurer Nathan Drake as he goes on all kinds of globetrotting escapades. While each game follows its own central mystery à la Indiana Jones, the series has a deeply compelling throughline in the relationships between Nate and his on-again, off-again love interest Elena Fisher and mentor/father figure Victor “Sully” Sullivan. 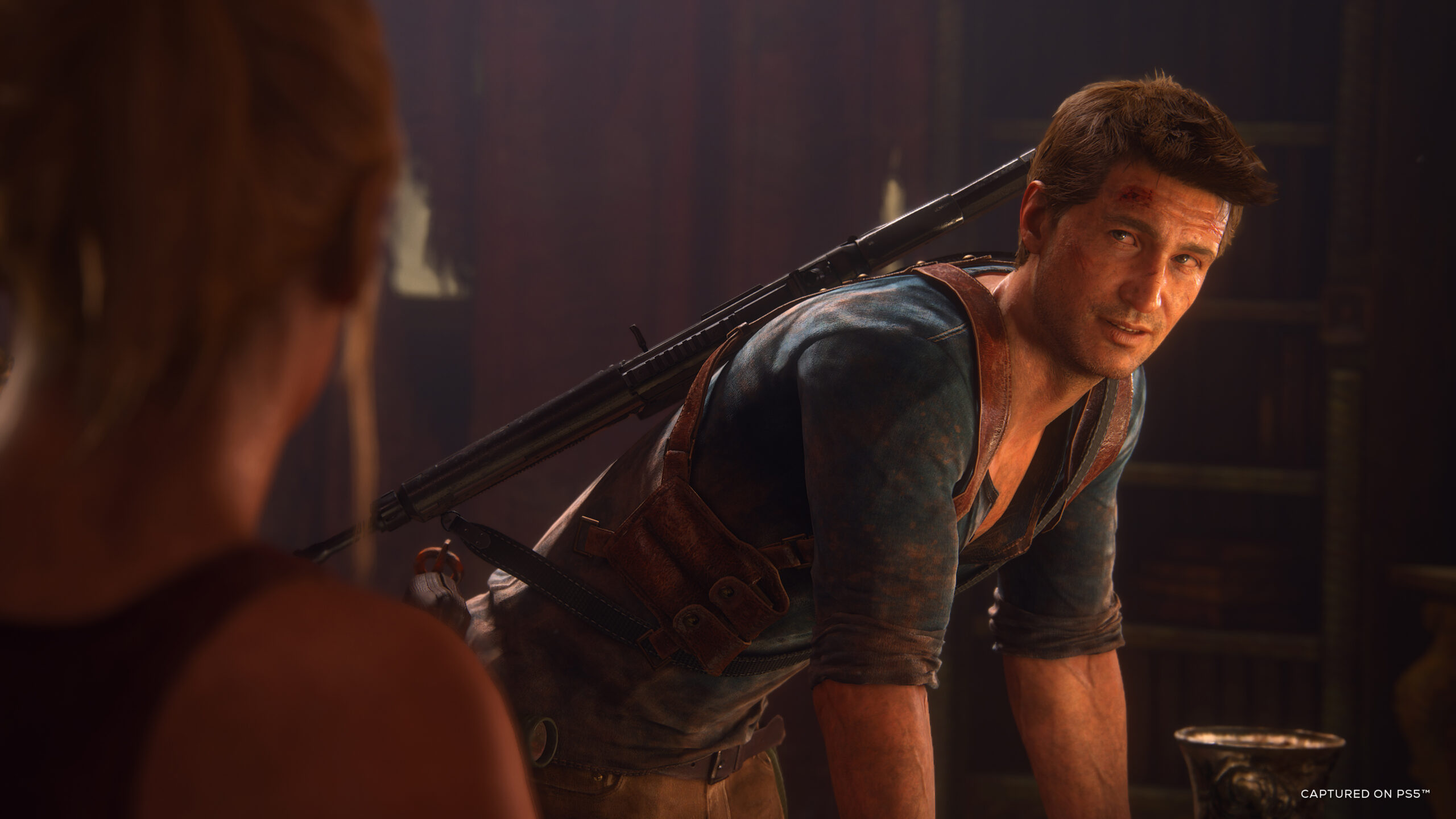 Nate and Elena are such a lovably human couple, but you won’t fully appreciate their relationship without the context of the first three games.

Part of the brilliance of A Thief’s End is how it offers a more nuanced exploration of these threads compared to previous games in the series, especially with respect to how Nate’s obsessive qualities strain his endearing relationship with Elena. As such, there’s a great deal of emotional weight and satisfying payoff (not to mention a slew of grin-inducing callbacks) in A Thief’s End for those who have played through its predecessors. After all, it is, as its title suggests, a swan song for Nate — one final adventure in which he, his long-lost brother Sam and Sully embark on a dangerous search for pirate Henry Avery’s treasure while a wealthy businessman and his private military company pursue them.

All told, it’s an extremely well-written and acted tale, but one that you won’t fully appreciate without knowing the previous games. Although The Nathan Drake Collection — a package of PS4 remasters of the first three Nate-led Uncharted games — is pretty cheap at this point and is playable on PS5 via backwards compatibility, the overall value of Legacy of Thieves nonetheless feels reduced with their absence. It would have been nice if that trilogy was thrown in to make this PlayStation’s response, of sorts, to Xbox’s Halo: The Master Chief Collection. Even the Xbox One remaster of the first Gears of War offered the other three games in the series (at that point) at no additional cost. Confounding these issues is the fact that Legacy of Thieves doesn’t even feature a sort of “Previously on…” recap to help ease you in. 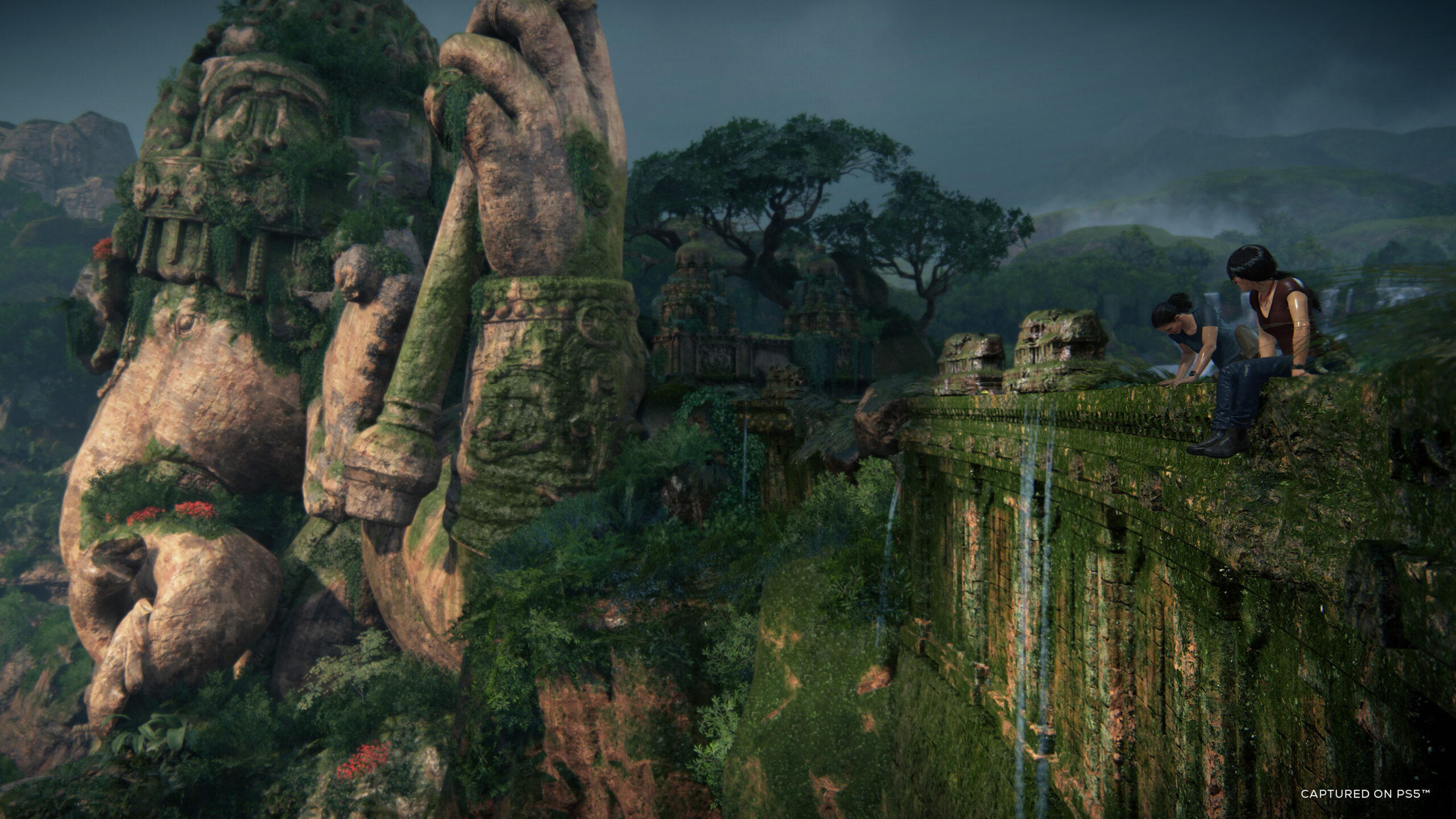 The camaraderie between Chloe and Nadine is a genuine highlight and refreshing departure from Nate’s relationships.

The Lost Legacy, on the other hand, works far better on its own. While not without its own fair share of references to previous games, the story isn’t actually about Nate at all. Instead, Nate’s old flame Chloe Frazier (who was in Uncharted 2 and 3) and Uncharted 4 villain Nadine Ross co-star in this India-set adventure about stopping a warlord and his army from finding a dangerous mystical empire. The Lost Legacy is just as engrossing as A Thief‘s End, with the added benefit of being a shorter, tighter experience that removes a lot of the bloat that plagued its predecessor. It also feels like an effective trial run for what future Uncharted games — which are inevitable, given the series’ popularity — may look like without Drake.

The funny things about remastering these particular titles are that they’re not that old (A Thief’s End is from 2016, The Lost Legacy 2017), and Naughty Dog is renowned for making some of the best-looking games around. To that point, these two Uncharteds were already stunning on PS4, so there wasn’t a ton to build upon on PS5. Therefore, the bump in visuals from PS4 to PS5 doesn’t feel drastic, even with the native 4K/30fps ‘Fidelity Mode.’ Having said that, the other graphics options are much more impressive. With ‘Performance Mode,’ the games will output in upscaled 4K at 60fps, while ‘Performance Mode+’ takes that even further with 1080p/120fps. Truth be told, the difference between 60 and 120fps isn’t terribly evident to me (certainly not in the vein of 30 vs. 60), so I didn’t find the reduced visual quality to be worth it. But the base Performance Mode is absolutely perfect.

A Thief’s End and The Lost Legacy, which feature the same core gameplay systems, offer a bevy of mechanical improvements over their predecessors, including infinitely tighter gunplay and smoother climbing. With Performance Mode, all of this just feels so much more fluid, while also not looking significantly worse than Fidelity Mode. In particular, the high-octane, jaw-dropping setpiece-filled action the series has become known for is far livelier and more engaging with 60fps. As someone who played many hours of A Thief’s End and The Lost Legacy on PS4, it’s difficult now to imagine how I ever played at 30fps.

“…missing from Legacy of Thieves is the surprisingly solid Uncharted 4 multiplayer suite.”

The other most pronounced difference can be found in the load times. Naughty Dog games often have some of the longer ones I’ve encountered — completely understandable, to be fair, given their immaculate presentation values. But with the PS5’s ultra-fast SSD, I would load in within 10 or 11 seconds, which is most welcome. Otherwise, the remaining PS5 enhancements are decidedly more understated. 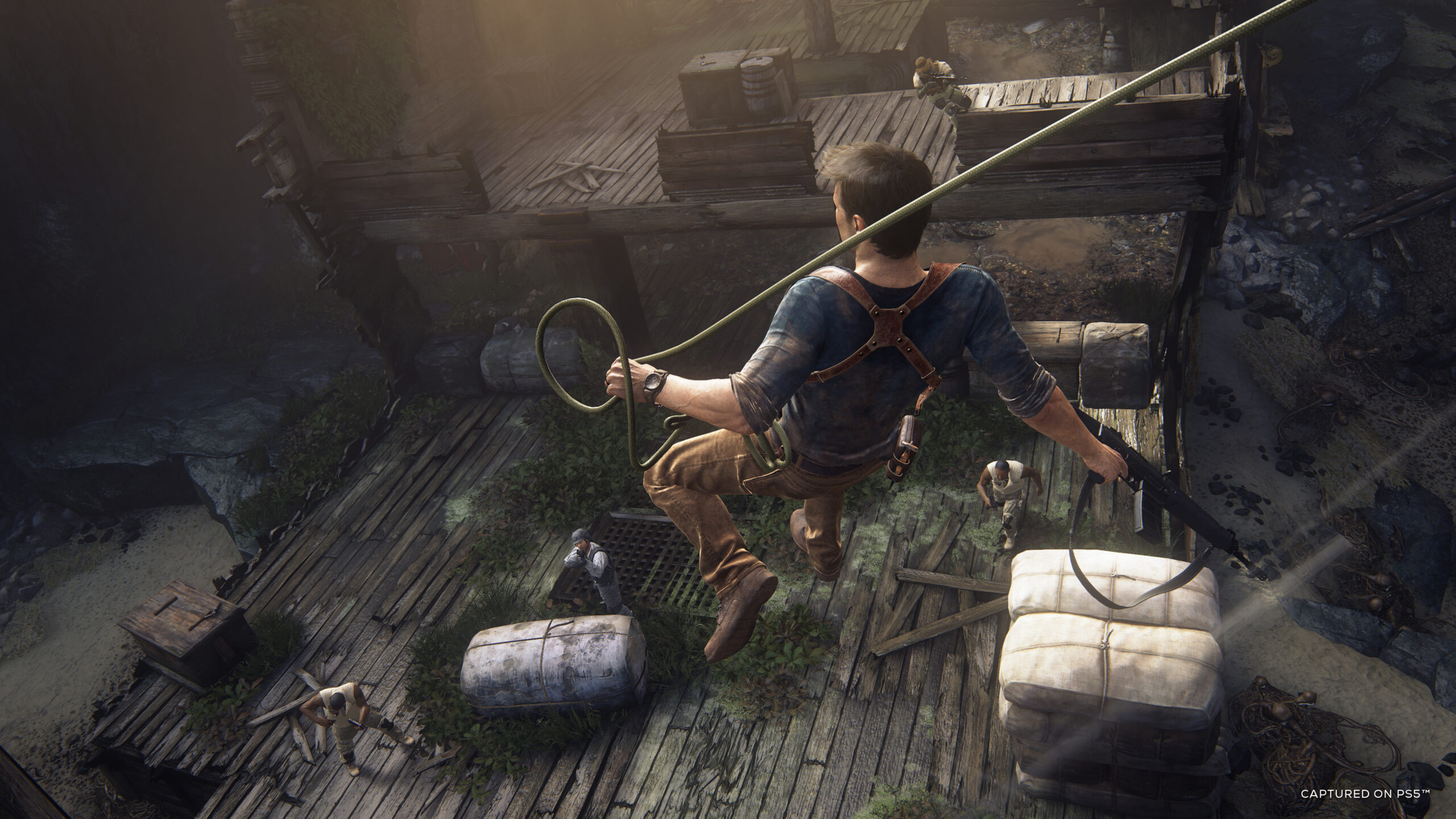 There’s the obligatory DualSense haptic feedback, found in punches, jumps and vehicular traversal, as well as adaptive triggers for rope swings. Both A Thief’s End and The Lost Legacy feature vehicle segments where you can drive around open areas to either progress the story or go off the beaten path for treasures and optional dialogue, and the haptic feedback was most effective here. Naughty Dog has an uncanny attention to detail, and that results in richly detailed environments featuring all kinds of puddles, bumps and other attributes. This makes driving around feel realistically bumpy, and each turn, slide and pile of mud I encountered felt more immersive through the haptic feedback.

On the flip side, I was indifferent to the last PS5-specific feature: Spatial 3D Audio. While this gives more immersive, location-specific sound — which can, in theory, be especially useful in hearing where bullets are coming from — I’ve never been much of an audiophile, so I admittedly never noticed much of a difference. That said, the sound design, Henry Jackman’s score and performances are uniformly stellar. 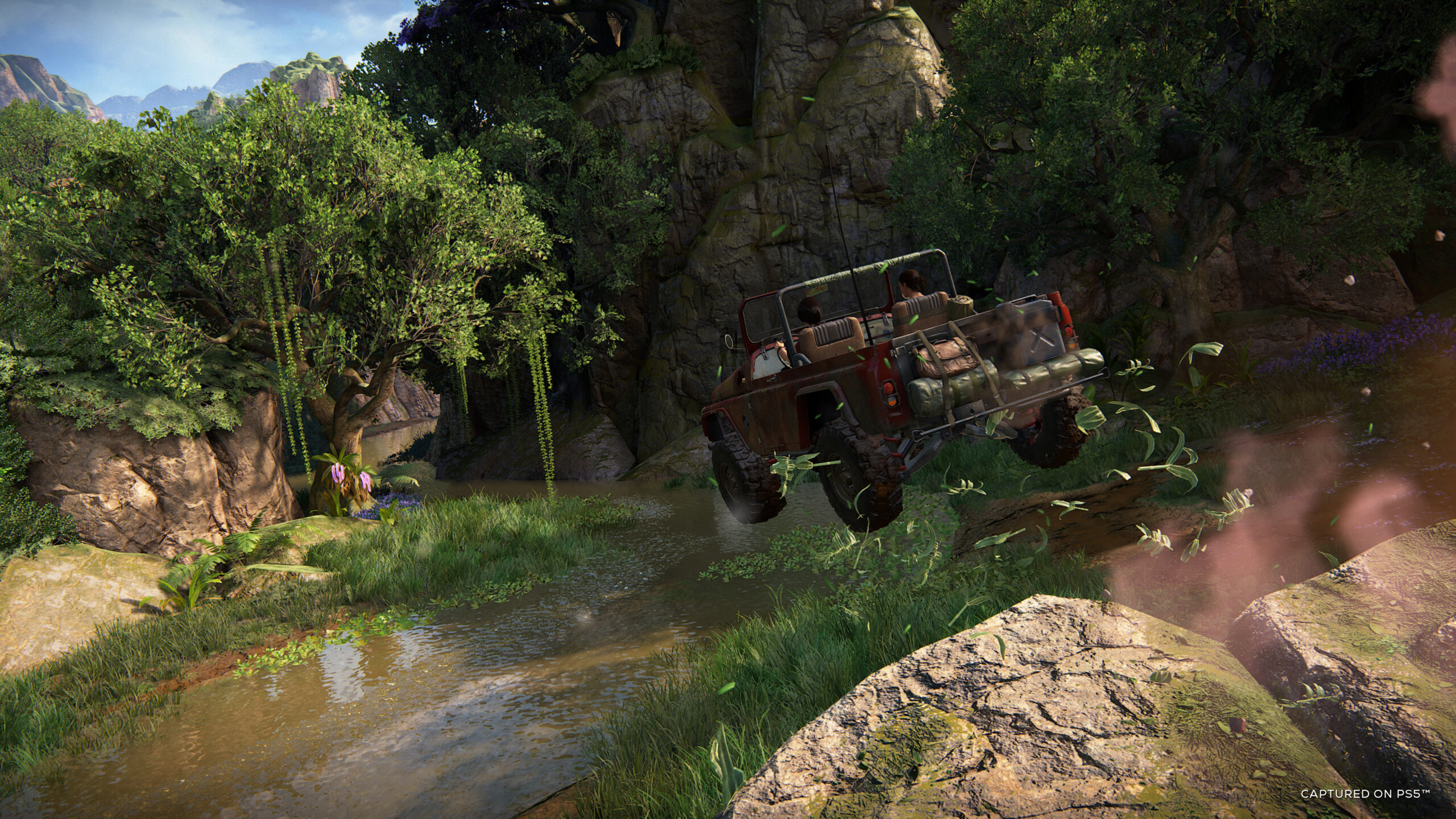 Uncharted: The Lost Legacy’s quasi-open-world is a blast to explore, and the DualSense feedback makes driving around feel even more immersive.

One final note: missing from Legacy of Thieves is the surprisingly solid Uncharted 4 multiplayer suite, which is included in the PS4 versions of A Thief’s End and The Lost Legacy. As someone who’s spent quite a bit of time with the game’s online competitive and cooperative modes, their omission is somewhat disappointing, even if they’re not the main attraction. Either way, you’re not getting the complete PS4 package, which is a shame.

In the end, Uncharted: Legacy of Thieves Collection is easy to recommend, with a few big caveats. Those who have never played an Uncharted won’t get the full story here, which can make some of A Thief’s End not feel as impactful. Further, the actual PS5 enhancements, outside of the genuinely game-changing frame rate boosts, don’t make much of a difference.

Having said that, A Thief’s End and The Lost Legacy are so damn good that those don’t feel like major issues at all. Both feature exceptional, rip-roaring and heartfelt experiences that rank among PlayStation’s very best. Even as someone who’s played these games multiple times before, I found myself really enjoying revisiting them. There’s even a $14.99 upgrade path, which makes it easier to recommend, in a way, if you already own the games. As we wait for a brand-new Uncharted game on PS5, you can certainly not go wrong with Legacy of Thieves Collection.

Uncharted: Legacy of Thieves Collection launches exclusively on PlayStation 5 on January 28th. The game will also come to PC (Epic and Steam) on a yet-to-be-confirmed date.

Penny Lane Coat: Where To Shop This Y2K Winter Staple