In a recent update to its website, Koodo added new text detailing the “offer” end date to both plans. However, it’s worth noting that the $58/mo 15GB option was the only promotional offer.

The move comes after both Fido and Virgin Plus tweaked plans to replace their $52/8GB and $58/15GB plans with $55/8GB and $60/15GB plans respectively. It’s unclear what plans Koodo will offer on February 27th once it removes the old offers, but I’d be surprised if Koodo didn’t match Fido and Virgin.

This will likely mark the end of Koodo’s $58/15GB promo plan, which has been available on and off since January 22nd. 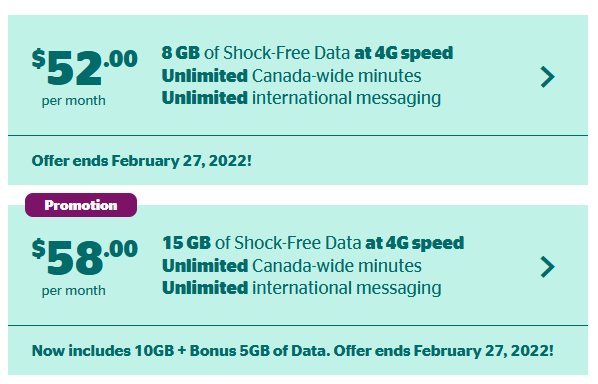 As a refresher, the $58 promo plan was actually a 10GB plan with a 5GB data bonus. It’s possible Koodo may follow Fido and keep the $58/10GB plan but remove the bonus data. Regardless, we’ll see what happens in a few days.

Koodo does still offer ‘Starter’ plans that are cheaper and have less data, but Koodo also restricts those to bring-your-own-phone customers.

Finally, it’s also worth keeping in mind that Koodo recently added data speed caps to its plans, limiting them from going over 100Mbps down. While 100Mbps is likely still suitable for most mobile tasks, it’s frustrating that yet another restriction has been added to Canadian cell phone plans.

You can view Koodo’s plans here.