Racing down the speedway, Polyphony Digital has the pedal to the metal as it approaches the release of Gran Turismo 7.

In a closed-door media session, Polyphony Digital offered a taste of what to expect from the latest Gran Turismo title. I also had the chance to hear from Kazunori Yamauchi, studio president and game designer on Gran Turismo 7. Polyphony Digital is taking a bold approach to showcase and celebrate car culture with mass appeal to all audiences.

Utilizing the PlayStation 5 to its full potential, Gran Turismo 7 appears to introduce new innovations to the series while catering to car enthusiasts and casual racing fans alike.

Gran Turismo 7 will see the return of the World Map. Here, players can navigate between core features and content the game offers such as ‘Garage,’ ‘World Circuits,’ ‘Cafe,’ and multiplayer. 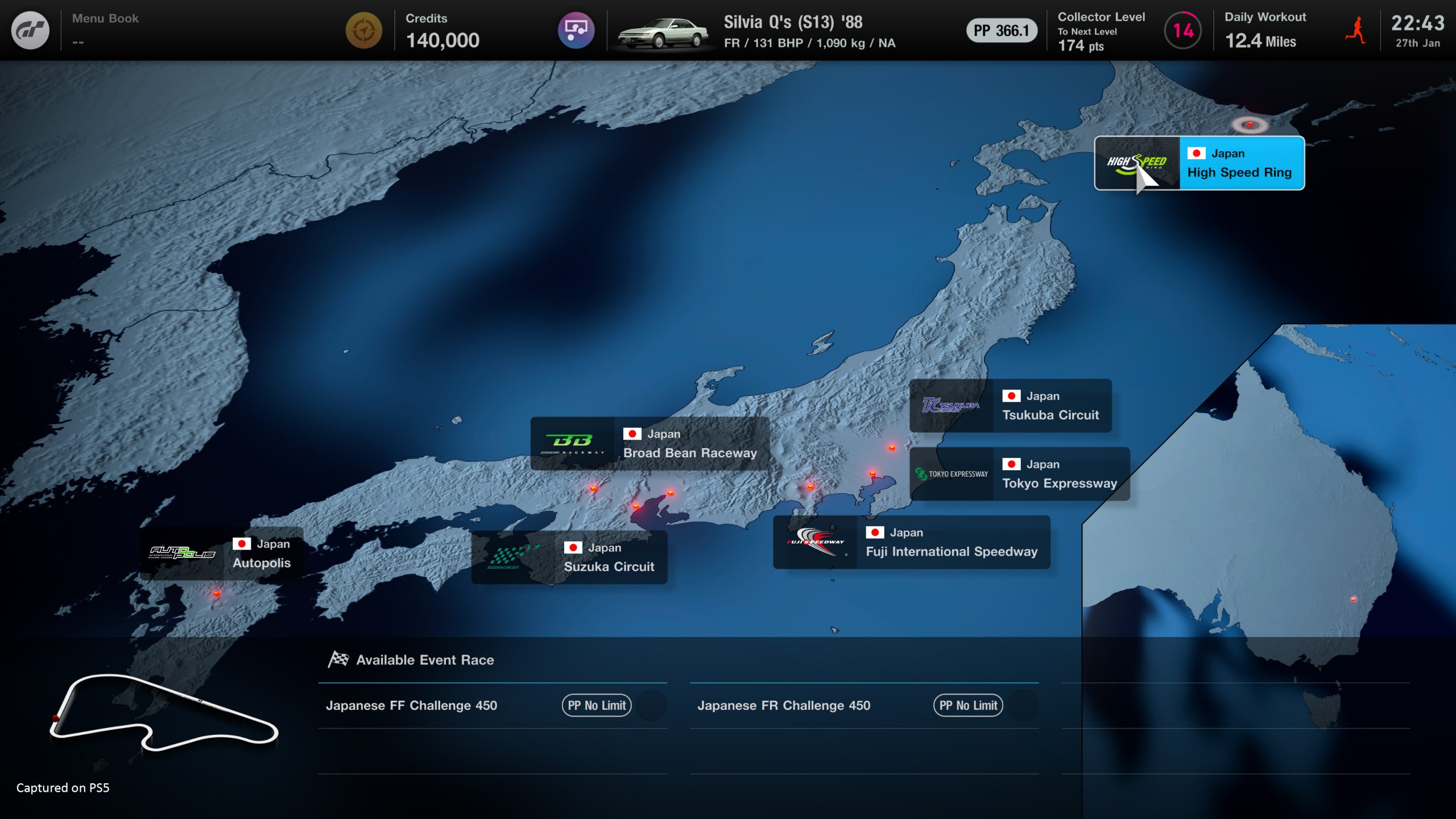 This will act as the hub for players along their journey and familiar elements are utilized. However, Polyphony Digital has integrated new features as well.

A core concept Gran Turismo 7 is built on is the “Car Life Simulator,” this sandbox world that players will interact and race in that breeds car culture and driving simulation. Cornerstone systems that help support this direction include physics-based graphics, dynamic weather and day/night cycles. On top of that, a content and sharing system, multiplayer suite, and replay engine all support the game. 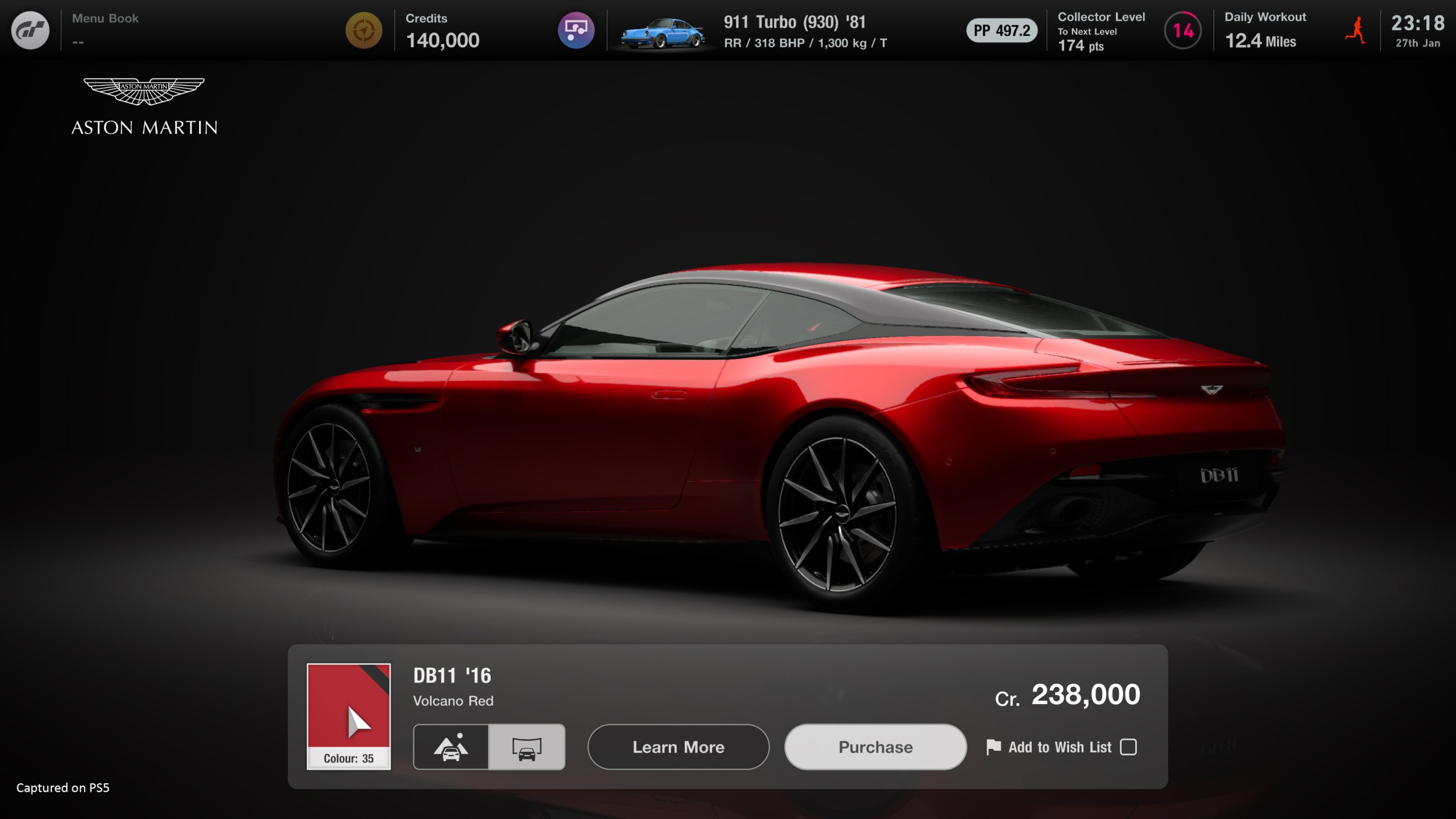 At launch, Gran Turismo 7 will offer over 400 vehicles. Although Polyphony Digital has not detailed a full list of which cars are included, they range from entry models to Legendary cars. The Used Car marketplace will offer a consistent rotation of vehicles to purchase in-game for players, similar to previous installments.

Gran Turismo 7 will offer 34 locations to race through with a total of 90 different layouts at launch. Real-world tracks have been incorporated into the game alongside others that the team has put together. Each track hosts various races and activities, differentiating Gran Turismo 7 from previous installments. Activities include events such as Sunday Cup and Clubman Cup. 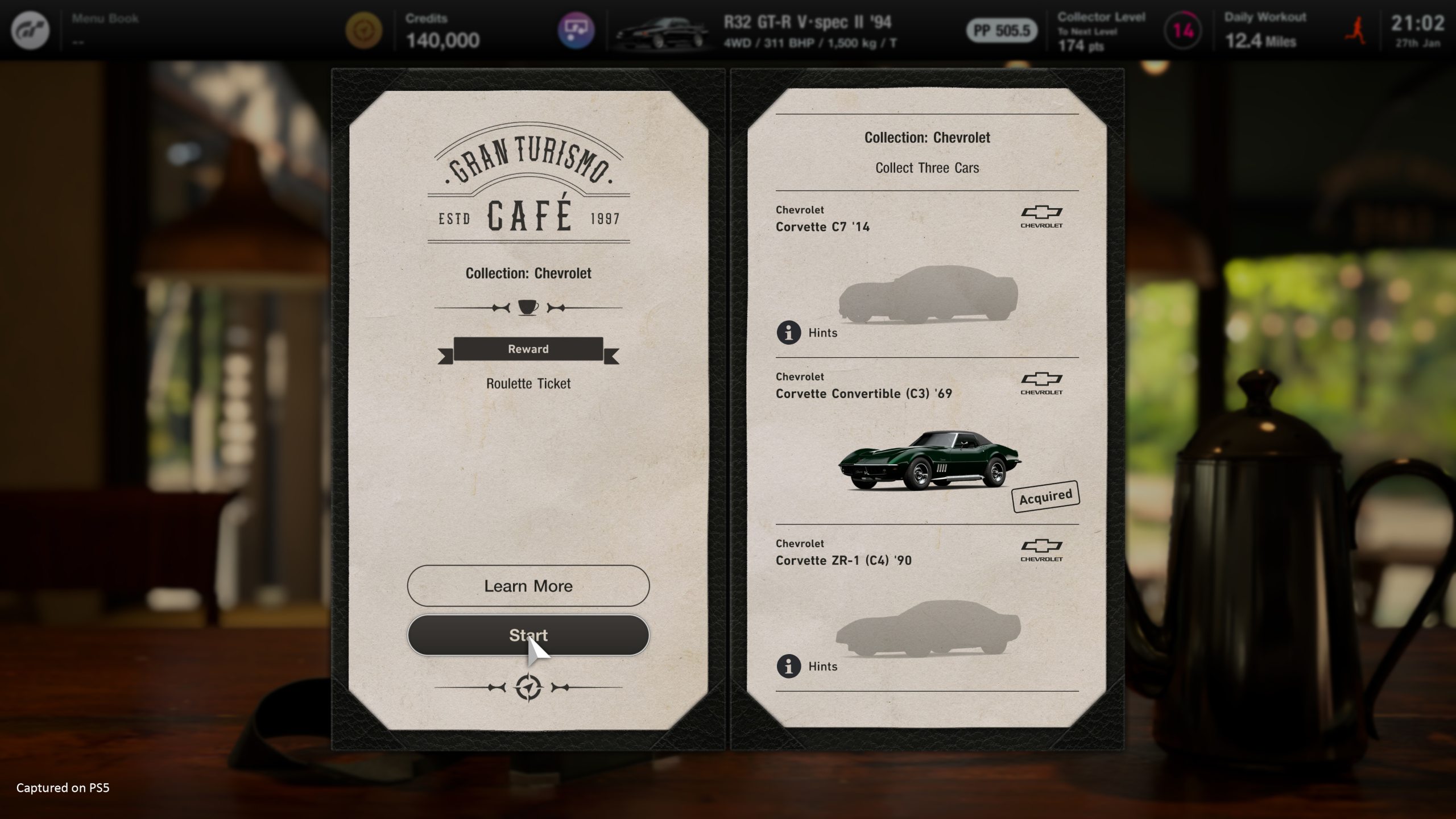 The Café acts as an accessible gateway for players. Peeling back the layers of the world of Gran Turismo, the game will offer assignments via the ‘Menu Book.’ There are over 30 core quests within the Menu Book. Completion of these assignments will help players achieve the overall “ending” of the game’s campaign. Though, there’s still much more supplemental content to complete.

Polyphony Digital confirmed that Gran Turismo 7 will offer a performance and fidelity mode on PlayStation 5. The ‘Performance Mode’ offers “the highest frame rate possible throughout the game” — 60fps. ‘Fidelity mode,’ dubbed ‘Ray Tracing Mode,’ as you may have guessed, offers Ray Tracing in select modes. These modes include Photo Mode and Replays where “players’ quick response time is not really required.”

Audio is also a big part of Gran Turismo 7. As expected, the game supports 3D Spatial Audio. Yamauchi detailed that the game will use third-order Ambisonics. This helps create 16 channel equivalent soundscapes, with different sound reflectors imitating materials and surroundings. Best used with headphones, the audio design will help pinpoint and identify the different layers in the audio. From the wheels spinning on the pavement to the sound of rain hitting the vehicle’s windows or roof, it all adds to an immersive driving experience. 3D Spatial Audio will also help differentiate sounds depending on angles and if it bounces off soft or hard material.

“On the PlayStation 4, it could take up to a minute for a track to load.”

Gran Turismo 7 intends to utilize the features supported by the PlayStation 5 DualSense. I was told that haptics will be fully supported with vibrations used between different surface textures. The DualSense haptics will also be felt as players race down the laneway and skid across the track. As the engine picks up, the DualSense is able to calibrate and reflect that to the player. On top of that, using the PlayStation 5’s SSD, the transition from the World Hub to racing is near-instant.

“On the PlayStation 4, it could take up to a minute for a track to load. That’s because we have to load the entire data for the world into memory. To enable the drivers to get onto the track, the same thing can take less than a second on the PlayStation 5. It’s hard to say if you can even call it a transition anymore when it’s that fast to load,” said Yamauchi.

Yamauchi went on to state that Gran Turismo 7 will not utilize the DualSense’s onboard speaker. 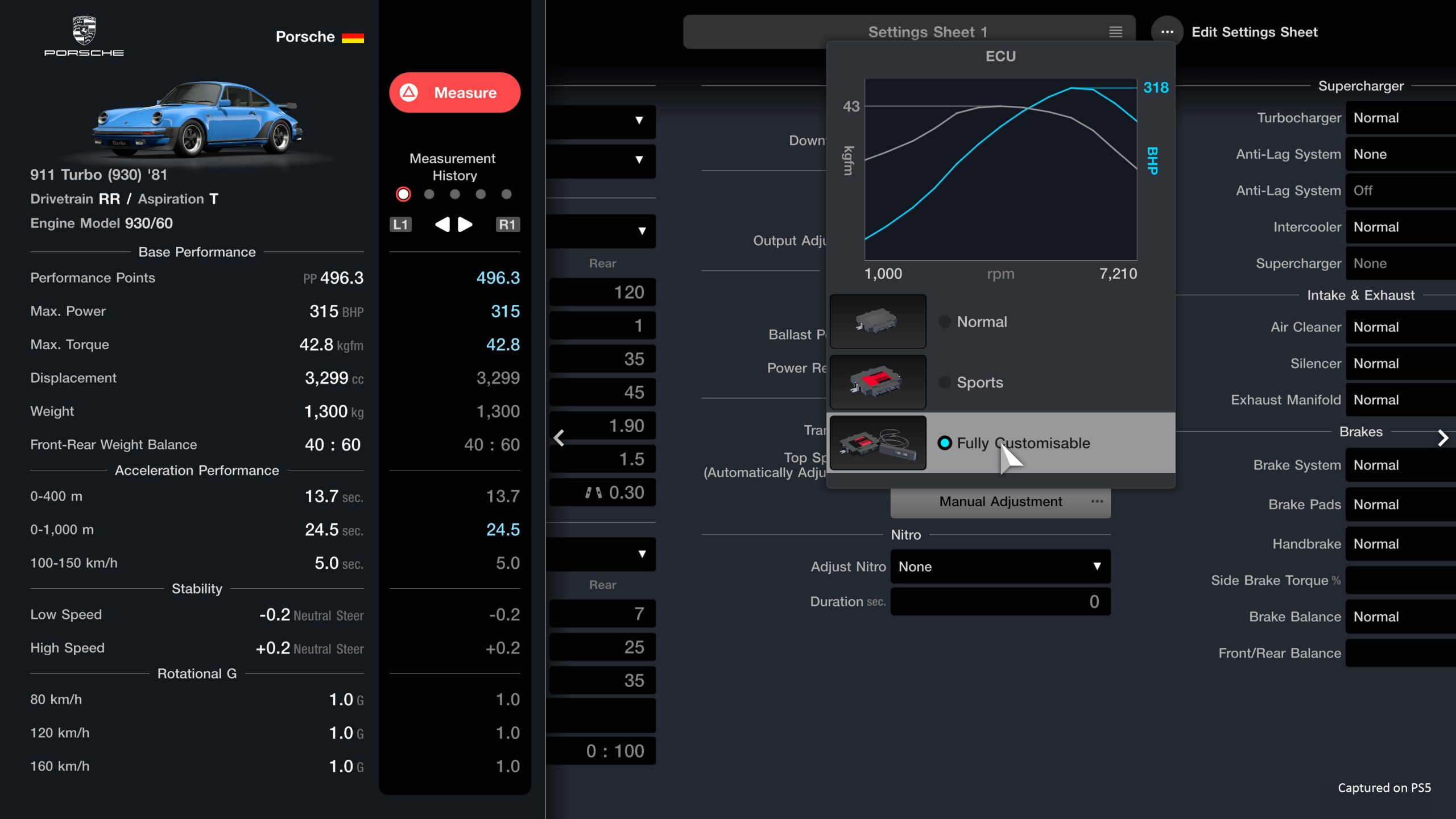 Of course, since Gran Turismo is a racing simulator, customization and tuning will play a big part in the experience. In the title, the vehicle’s overall performance and stats are displayed onscreen. As the player fine-tunes their vehicle, the changes are reflected in real-time. The sheer number of customization options is staggering and there seems to be a lot to sink your teeth into if you’re a gearhead.

On top of the standard racing and tuning aspects of Gran Turismo, Polyphony Digital has also developed a suite of user-generated content for players. With a game sporting as much graphical fidelity as Gran Turismo 7, a ‘Photo Mode’ that captures stills of vehicles and landscapes is welcomed. User-created Liveries are also be supported, with the ‘Showcase’ hub acting as a way for players to share content with one another. Liveries and stamps made in Gran Turismo Sport are confirmed to carry over to Gran Turismo 7. 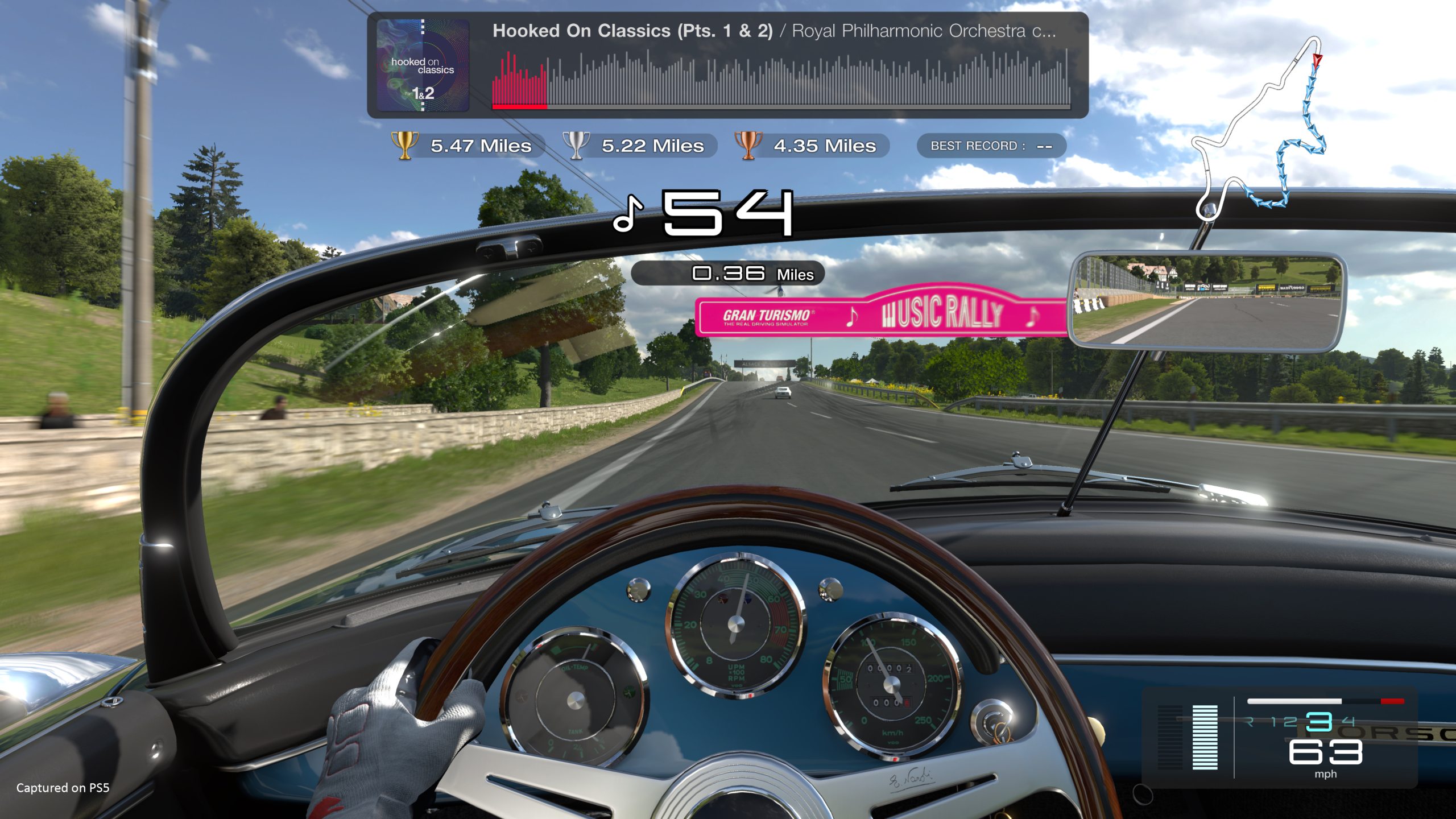 Yamauchi also shared more information about Gran Turismo 7‘s Music Rally. This mode is dedicated be more laid-back and fuses gameplay with music. Music Rally encourages players to take in the sights and sounds of the game without feeling compelled to be competitive. It seems like it’s very accessible to new players and provides a fresh hook for racing veterans.

“The point is to listen to the music. It’s not made to be very difficult. It’s really geared for beginner drivers. But really good drivers can actually still play around a little bit while they play the mode,” said Yamauchi.

Complaints regarding Tesla vehicle 'Phantom Braking' on the rise