DuckDuckGo’s App Tracking Protection is worth trying, despite issues

I joined the beta and have been using the feature since late December. Overall, it works fairly well, although I do have a few gripes.

It’s worth noting that although DuckDuckGo utilizes Android’s VPN functionality, it isn’t a VPN. Instead, DuckDuckGo says the feature uses a local “VPN connection” and handles everything on-device instead of routing users’ data through external servers. This approach lets App Tracking Protection work across most apps on your Android phone. Unfortunately for VPN users, that approach also means you won’t be able to use App Tracking Protection at the same time as an actual VPN.

For more on the nitty-gritty of how App Tracking Protection works, check out The Verge or DuckDuckGo’s blog post.

Over 2,000 tracking attempts blocked in the past week 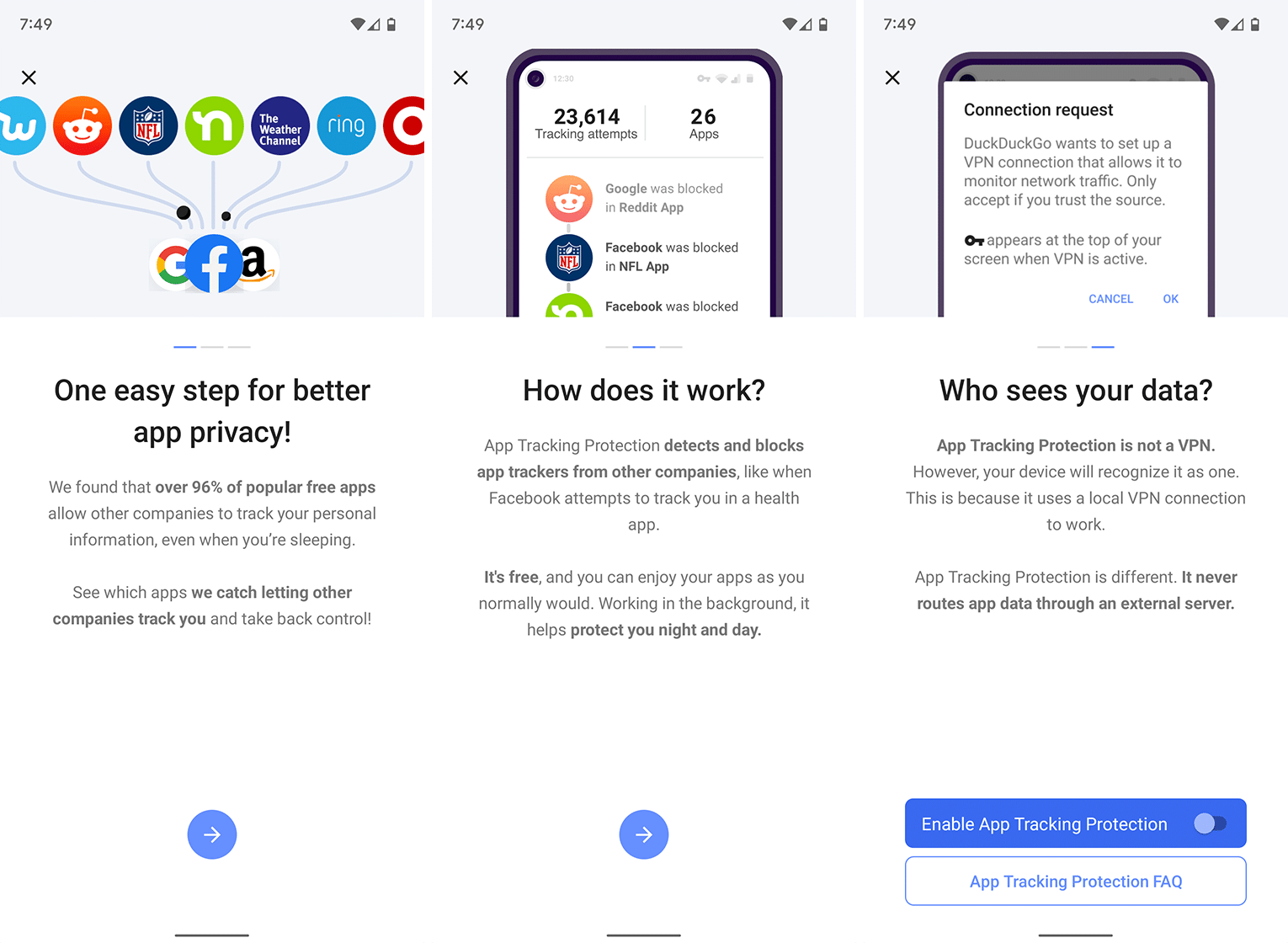 More important than how App Tracking Protection works is how well it works. And so far, I’d say it works pretty well.

The app is mainly a web browser with built-in privacy features, but I’ve been a long-time Firefox user and wasn’t interested in switching browsers. You can access App Tracking Protection by opening the app > tapping the three-dot menu button in the top-right corner > Settings > App Tracking Protection. It’s a few hoops to jump through to access this one thing, although you can access it quickly through a notification as well.

According to the DuckDuckGo app, it blocked 2,301 tracking attempts across 18 apps at the time of writing. While good (and somewhat creepy), it’s worth noting a few things. First, I have 116 apps on my Pixel 6 (at least, according to the Apps menu in the phone’s Settings app). Part of this is because many apps don’t send trackers unless you open them (not all apps, mind you, but at least what I’ve got on my phone).

Some apps attempted to track me hundreds of times per day 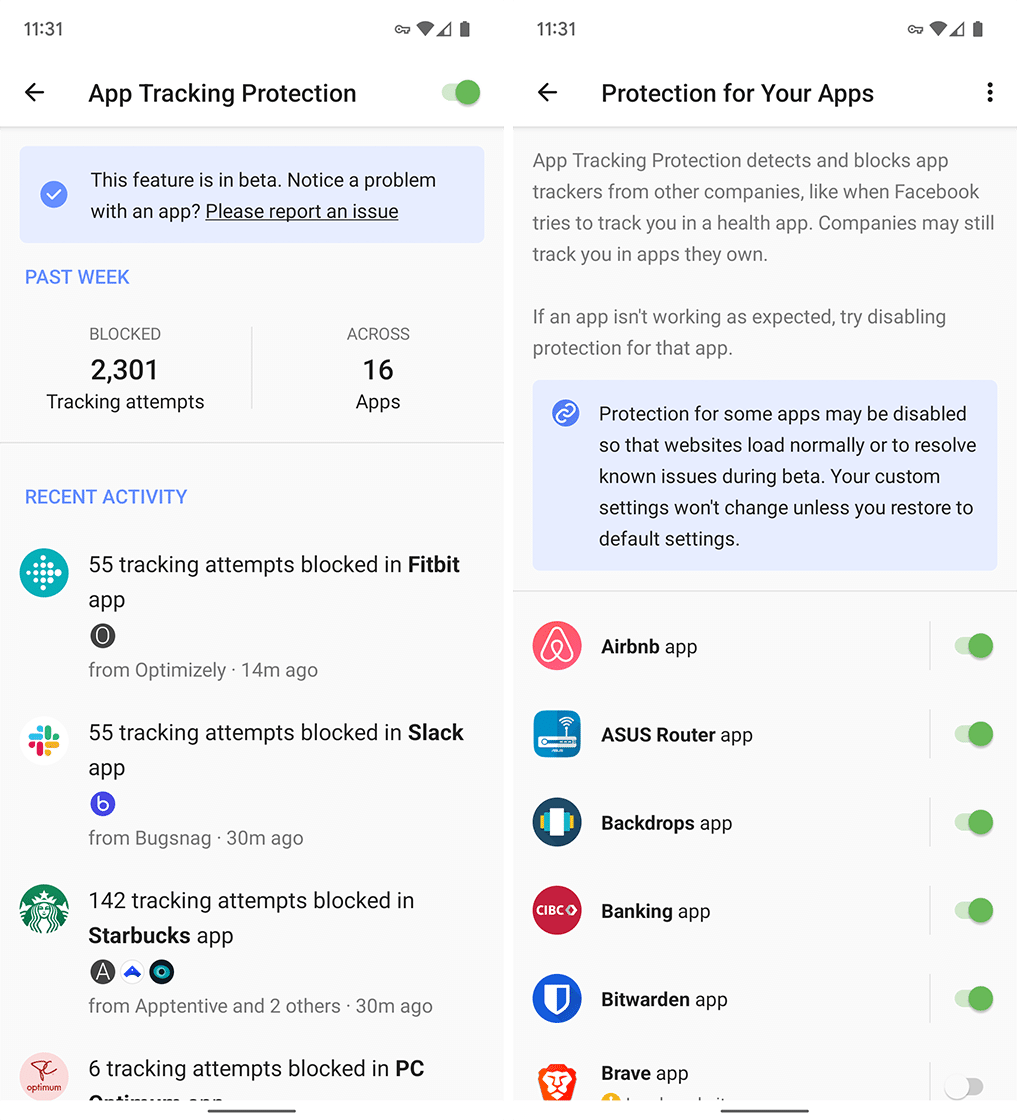 For example, I occasionally use the JustWatch app to find out if movies I want to see are available on the streaming platforms I use. App Tracking Protection didn’t catch any trackers from JustWatch until I opened it for the first time after I started using the feature. Other apps do send trackers in the background — App Tracking Protection has blocked over 140 tracking attempts from Starbucks almost every day. I use the app to store a Starbucks card and collect points — I only open it when I go to Starbucks, something I haven’t done yet this year.

I also appreciate that App Tracking Protection lets you see what tracking attempts get blocked. Slack, which I use for work, had over 100 blocked tracking attempts every day, but the only third-party tracker getting blocked was called ‘Bugsnag,’ which monitors apps for errors.

App Tracking Protection also lists several apps that have tracking disabled because of “Known issues.” I had 10 such apps on my phone, including Spotify, Signal, Discord Doordash and several web browsers like Firefox and Microsoft Edge. I wish the app provided more information about the known issues like it does with web browsers (which the app says it doesn’t block because they load websites). You can choose to override these settings — I haven’t since I didn’t want to risk breaking anything I use regularly.

However, that leaves a significant delta between the number of apps I have installed and the number of apps caught tracking me. Many of the apps on my phone are default system apps, which I hope aren’t tracking me, and Google apps — I know those are tracking me. Unfortunately, since DuckDuckGo’s App Tracking Protection focuses on third-party trackers, any tracking done by Google in Google apps will slip through. I’m also sure that App Tracking Protection doesn’t catch all trackers, but that’s something that may change as DuckDuckGo moves out of the beta period.

How does App Tracking Protection stack up?

As DuckDuckGo said, App Tracking Protection allows Android users to block trackers similar to Apple’s App Tracking Transparency feature. However, there are some key differences between the two.

On the other hand, Apple’s App Tracking Transparency doesn’t currently show which trackers it blocks, which is a nice benefit of DuckDuckGo’s take on the feature. That said, you can enable the ‘App Privacy Report‘ in Settings > Privacy on your iPhone, which shows a general overview of domains an app connects to.

Ultimately, DuckDuckGo’s App Tracking Protection is pretty decent. It’s certainly not perfect, but considering the software is still in beta, it should improve in time. It also won’t stop invasive tracking completely. Still, it’s a step in the right direction if you want to be a little more privacy-conscious.