A classy EV with great infotainment


BMW’s all-electric SUV is the German automaker giving consumers what they want and more.

Well, we’re getting there.

I spent a week with the XDrive 50 trim of the iX, and loved it. It offers more than enough interior space for my friends, a few Ikea shelves and all of my gadgets. And it was a lot more fun to drive than you’d expect from a vehicle that looks like the child of a Suburban and a BMW M-series.

Above all else, the BMW iX is silent. This was the first time that I had an EV for an extended period where I didn’t crank the fake engine sound constantly, and the peaceful atmosphere it creates was difficult to give up at the end of the week. I thought my Jetta was broken when I got back into it and started to hear regular car noises again. 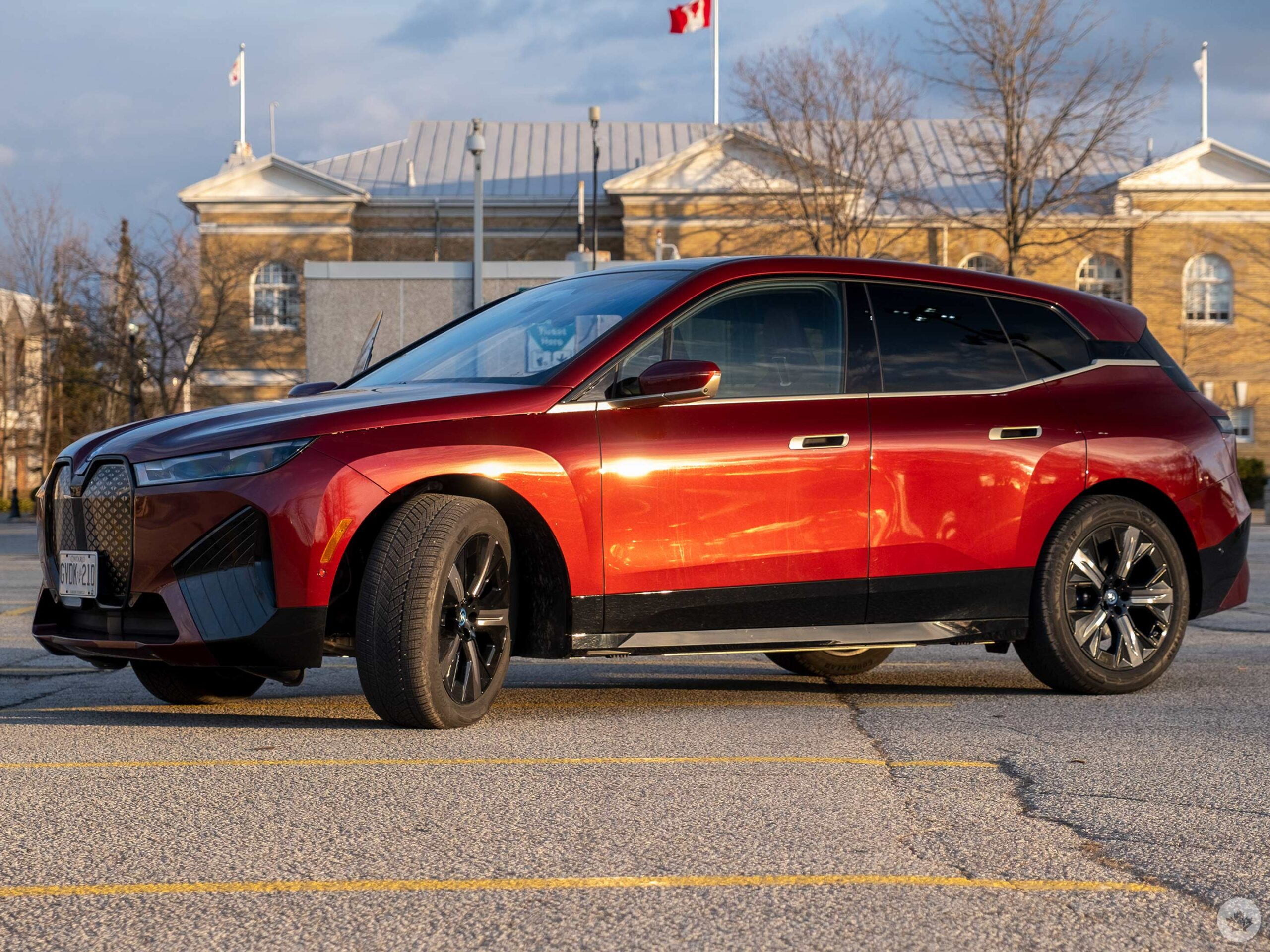 Driving the iX is a remarkably smooth experience. The large size of the vehicle and the high seat position feels commanding on the road, and having the instant torque that electric vehicles (EVs) produce make it feel like one of the most powerful SUVs out there.

It’s difficult to select an element to hone in on regarding the iX’s driving experience but, perhaps that says more about the EV than anything else. It can be calm and peaceful when you want it to, but it also has the ability to be powerful and aggressive. This isn’t solely achieved by iX being an EV, however. It’s also through the addition of an adaptive air suspension system that changes the way the car feels depending on what driving mode you’ve selected, not to mention the addition of a deeper EV sound that ramps up when ‘Sport mode’ engages. 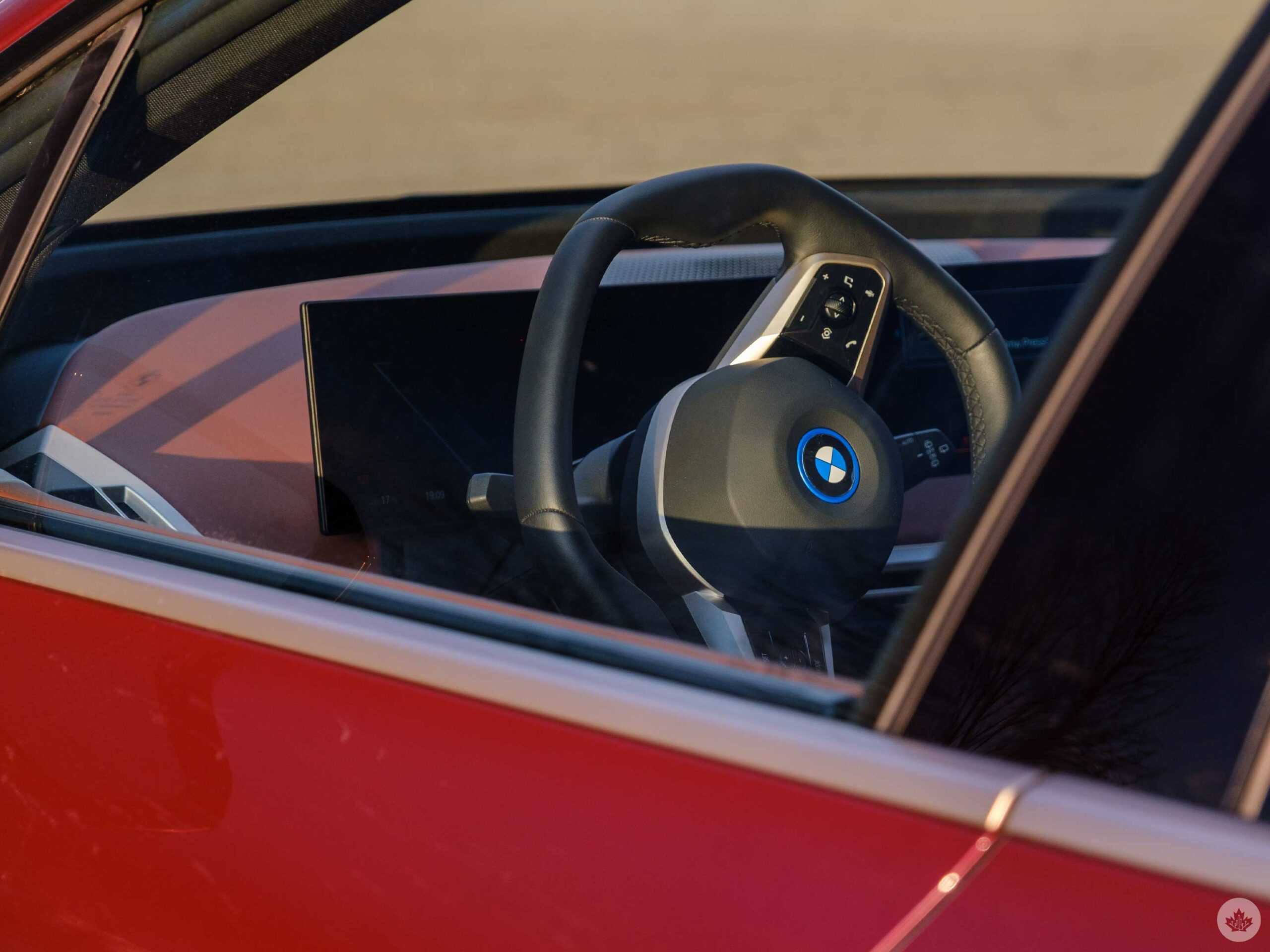 During my time with the car I drove it mainly in Eco mode, but having the option to kick it into Sport when I wanted to hear the fake sound or just to impress my friends with the EV’s fun torque, was easy to access and nice to have.

BMW’s website rates the iX at 521km of range per charge, but the 21-inch winter tires I rolled on seemed to get me closer to 475km, which was still more than enough. I was even able to drive from my house to the MobileSyrup office three times in a week without needing to charge, and I had ample battery to spare. I know most EVs offer similar estimated ranges of around 300km-400km, but that extra range the iX offers gave me peace of mind as I was driving around the city. 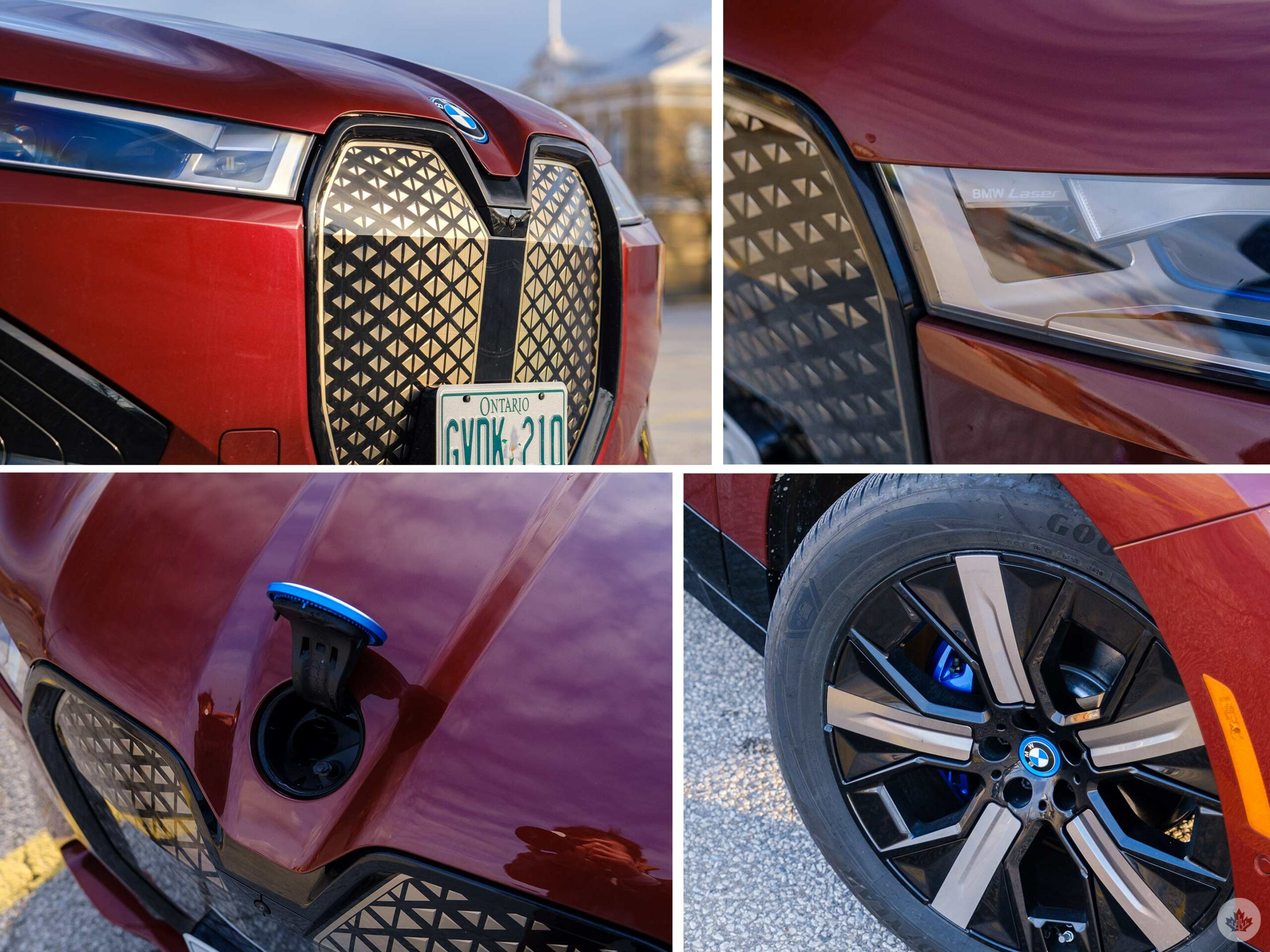 I really like driving around in the BMW iX. It reminds me of a really fancy Hyundai Ioniq 5 in all the right ways. It’s silent, comfortable, and offers a lot of interior space. However, there’s no front trunk or interior 120-volt outlets, which is disappointing. BMW says that the battery is too dangerous to have owners poking around it, so the hood is locked down on the iX. Instead, you can open the front BMW logo and fill up your windshield washer fluid there.

This seems like a miss to me since these small touches are part of what make EVs so fun and futuristic, but it doesn’t take a lot away from the overall impressive nature of the iX. 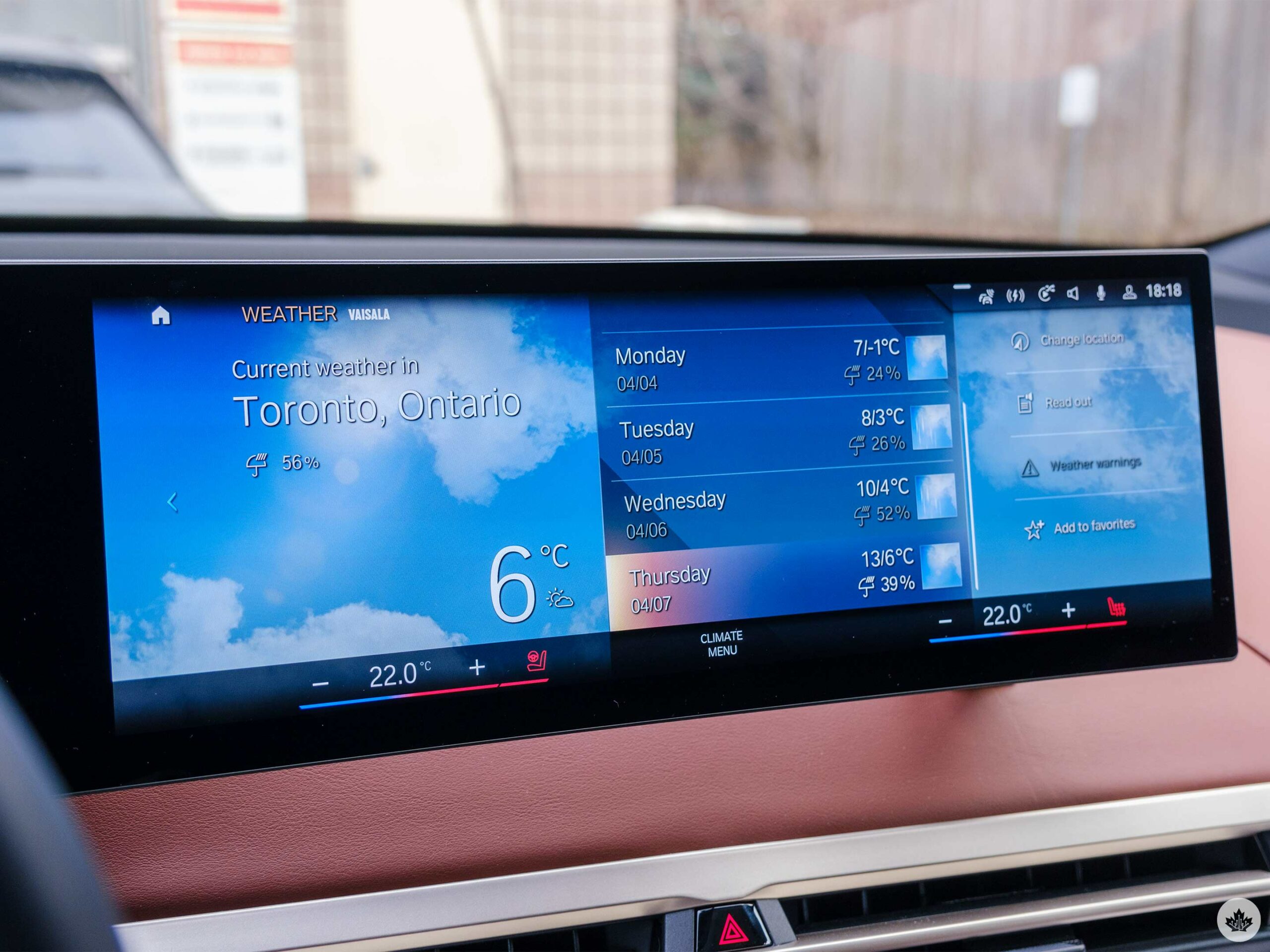 BMW packed a giant screen into the front of this vehicle that stretches from behind the steering wheel, where it acts as the digital instrument cluster over to the car’s centre. The section that sits in the center of the car is where the infotainment system is housed. This includes CarPlay and Android Auto, plus all of BMW’s features.

These features range from a BMW voice assistant, to regular car controls like climate and interior lighting effects, navigation and more. All of this is packed in a cohesively designed package called iDrive 8. This is also in the i4 and will be in other upcoming vehicles from the company. 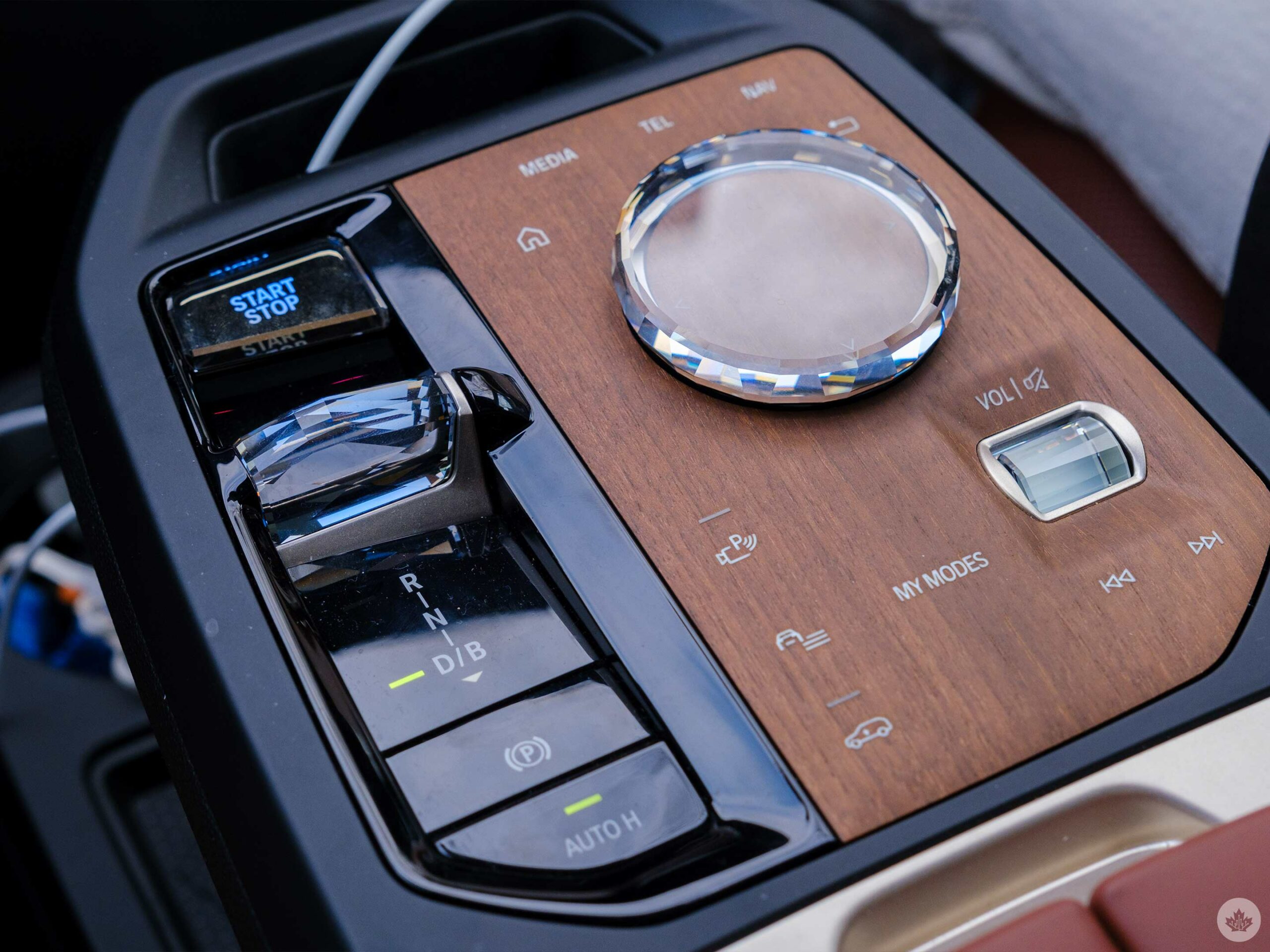 Right off the top, my favourite thing about the new system is the display. I found it a little wide, making it difficult to lean forward to reach the far right side. Beyond that, the text is crisp, and clean and the refresh rate feels smooth and responsive. It isn’t perfect, like tapping an iPhone, but I think it’s a step in the right direction. The sharpness on display here is really nice and even the parking assist cameras look high-definition, which is a welcome step up over the subpar backup cameras I’m used to. This large screen means that CarPlay is overly stretched out, but it’s still usable. Android Auto took advantage of the wide display much better.

BMW also smartly left a volume knob and other options like defrost as real buttons. I didn’t like the large centre console knob/d-pad device that can be used to navigate the infotainment, but there’s no denying that it looks pretty with the gemstone-type design the XDrive 50 trim featured. I get that it’s there to help people who aren’t used to touch screens, but at this point, I’d be interested to see if people actually find it intuitive. I was able to use it and had no real problems with it, but compared to other cars with trackpads or just touching the screen, it felt pretty useless since touching the screen is so natural now. 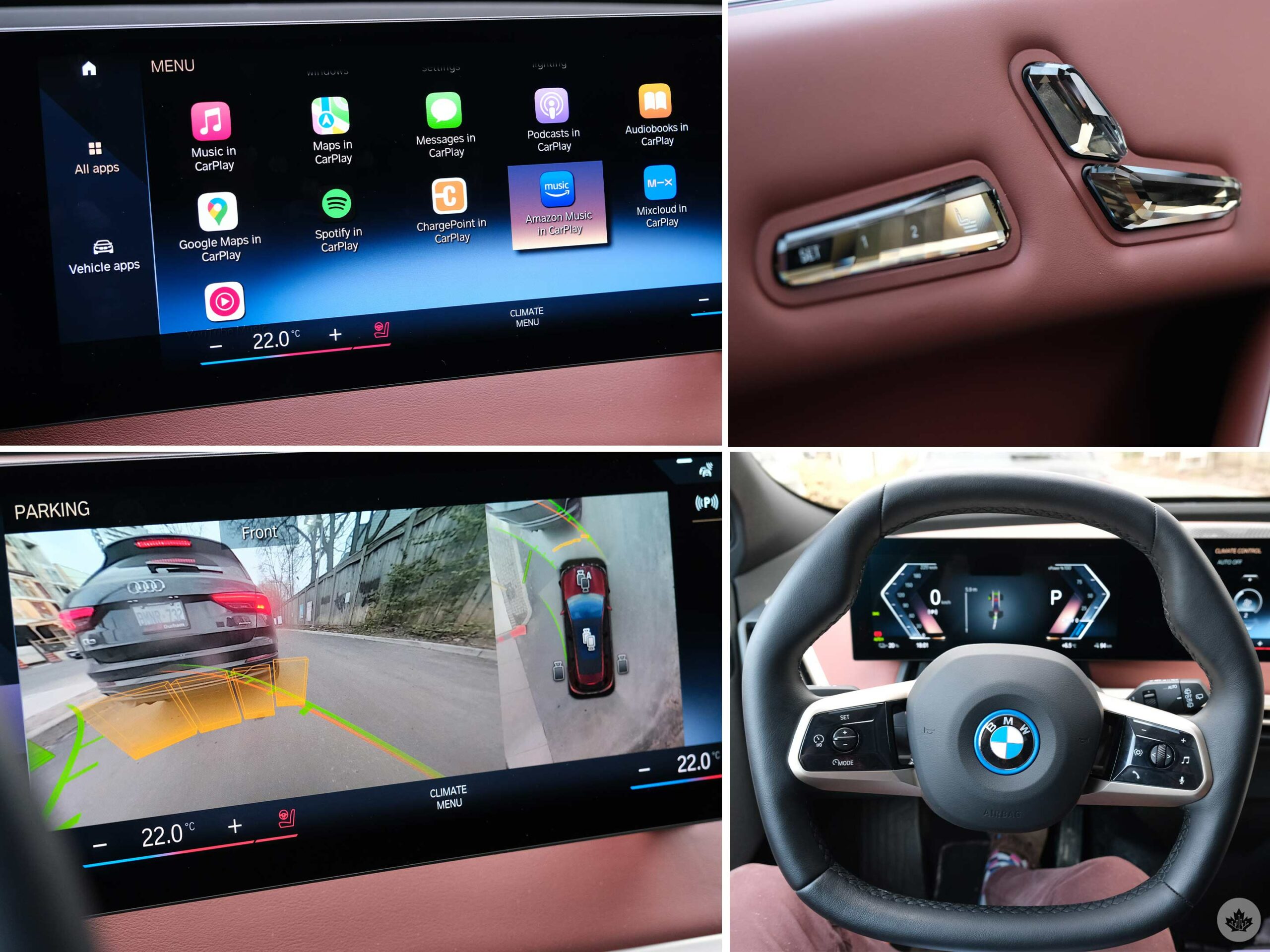 What doesn’t feel natural yet, but I hope will in a few years, is the iX’s in-car voice assistant. BMW has a good one, and its natural language processing is fairly dynamic with the ability to understand and adapt to phrases like “Hey BMW, my feet are cold.” However, this system still seems to be in its infancy with some of my potential questions failing to register. Ideally, this will be less of an issue for owners, as you’d be able to get used to the system’s accepted phrases over time. A lot of automakers have been focusing on voice assistants lately, and it’s exciting to see where they go from here.

One oddity with the BMW iX is that it also features Alexa built-in. However, you need to set the voice-activated assistant up via the MyBMW app and in the car’s settings, so I don’t expect a lot of users will take advantage of it. This assistant can play music, work with Alexa compatible garage door openers and perform other basic Alexa tasks. It can’t turn on the heat in the car or lock your vehicle doors, so if you really like voice controls, you’re going to need to talk with two assistants in your car. This is pretty par for the course right now, but as more automakers integrate Android Automotive and Google Assistant into their cars, this two-pronged approach will become outdated. 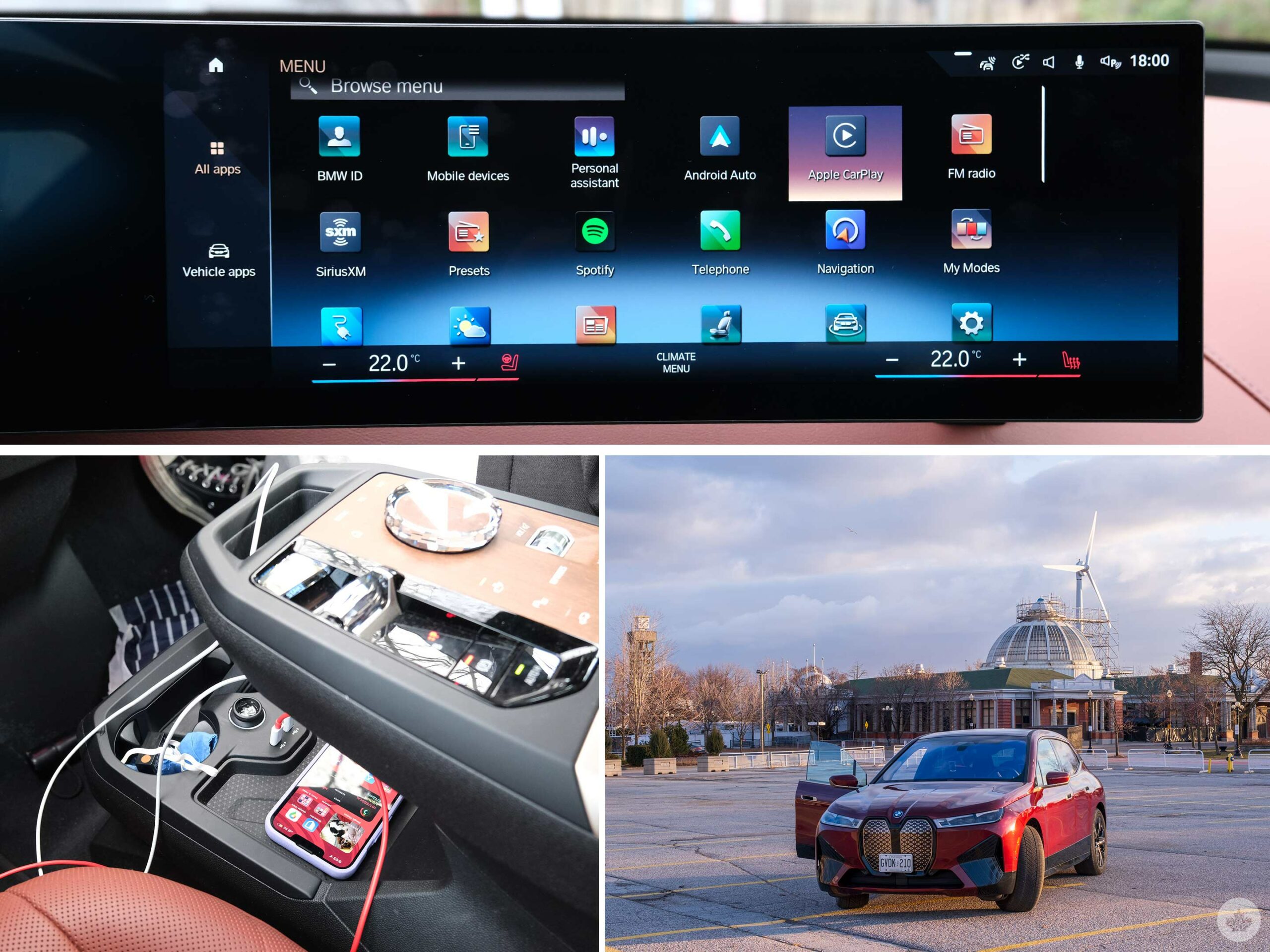 The thing that annoyed me the most is BMW’s insistence on forcing drivers to use its own infotainment systems instead of Apple’s CarPlay or Android Auto. For instance, regardless of the phone-based system I used, if I was navigating somewhere using Google Maps and there was construction ahead, the BMW navigation system would pop up uninvited to let me know of the obstruction that I’d likely already seen on Google Maps. This intrusive map needs to be swiped away using the touch screen or BMW’s unreliable air gestures.

There’s also a grid of apps that I liked on the BMW home screen, but they aren’t all the same. Some are tied to CarPlay or BMW settings and others can only be accessed sometimes or with the right logins or pre-setup. It’s confusing, and I wish the company could find another way to sort all of these items that would make it more clear what’s an actual app, what’s just a vehicle submenu, what can be used while driving and what can’t. 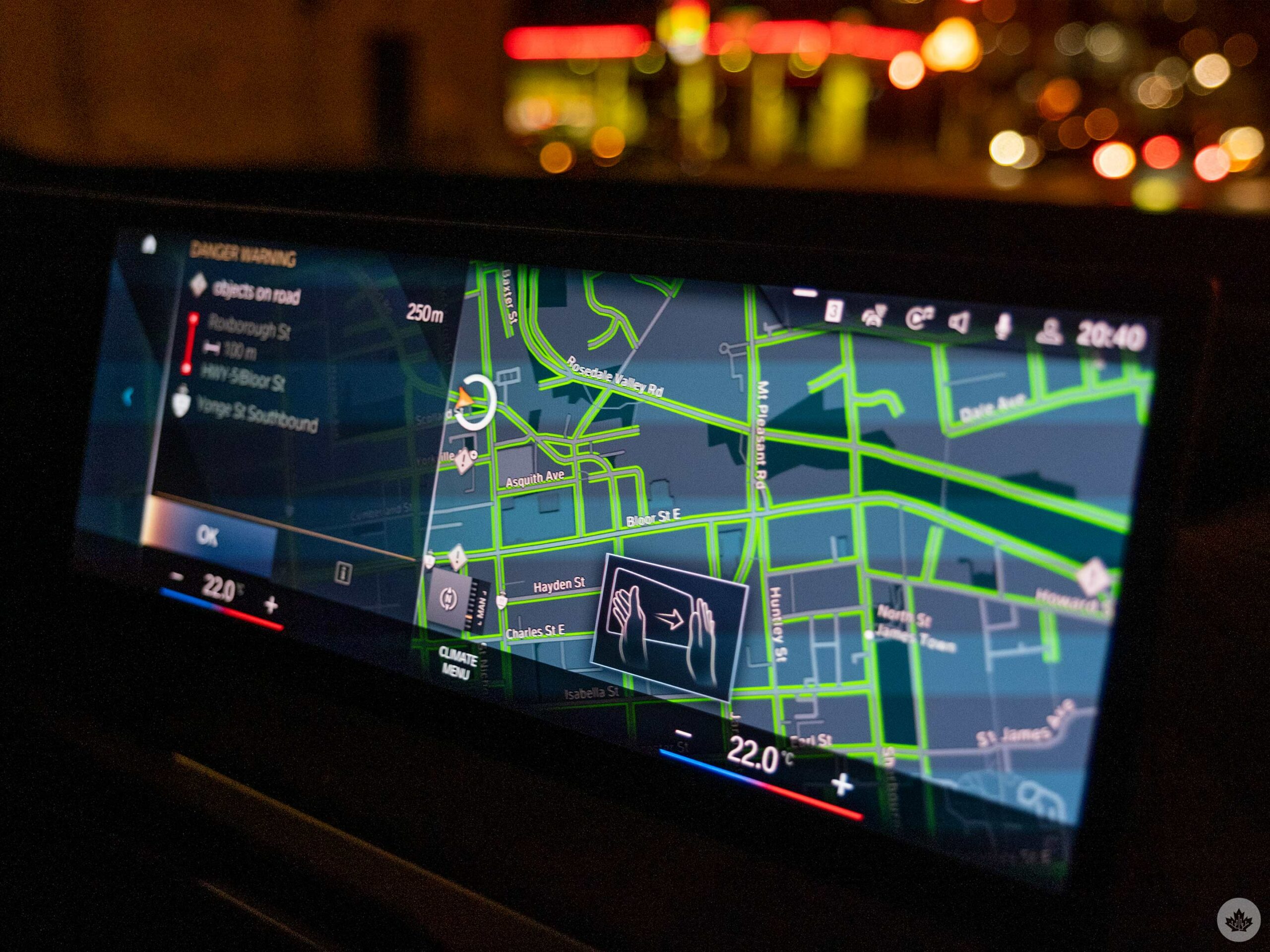 Moving back to the air gestures. They’re both helpful and annoying. Knowing what I do about every phone company that’s ever tried to make gestures work but failed, I’d caution BMW from going down this road, but since we’re here, it’s worth delving into the age-old air gestures speil.

Gestures are fun when they work, but for most things, there’s also a touch screen button and a real button on the centre console or on the steering wheel, that does the same thing. And humans are creatures of habit. If I know that I’m going to have to spin my finger around like a wizard casting a spell three or more times before the car notices that I’m trying to raise the volume, I’m likely just going to use the knob on the centre console or the steering wheel next time.

That’s what happened here. Sometimes the gestures would work, but sometimes they didn’t. On the other hand, the buttons and dials work every single time, so by the end of my drive, I just stuck with those. I like the intention of the gestures of helping smaller people who might have trouble reaching the screen, but perhaps this isn’t the best way to do that. These gestures are an add-on and I wouldn’t recommend anyone pay for them.

The vehicle’s climate menu was also straightforward and easy to use, a boon as most EVs struggle to incorporate this in an easy-to-understand way. The BMW iX screen always shows two climate settings along the bottom of the display so you can adjust your temperature on the fly. Between those controls is a button to take you to the climate menu. 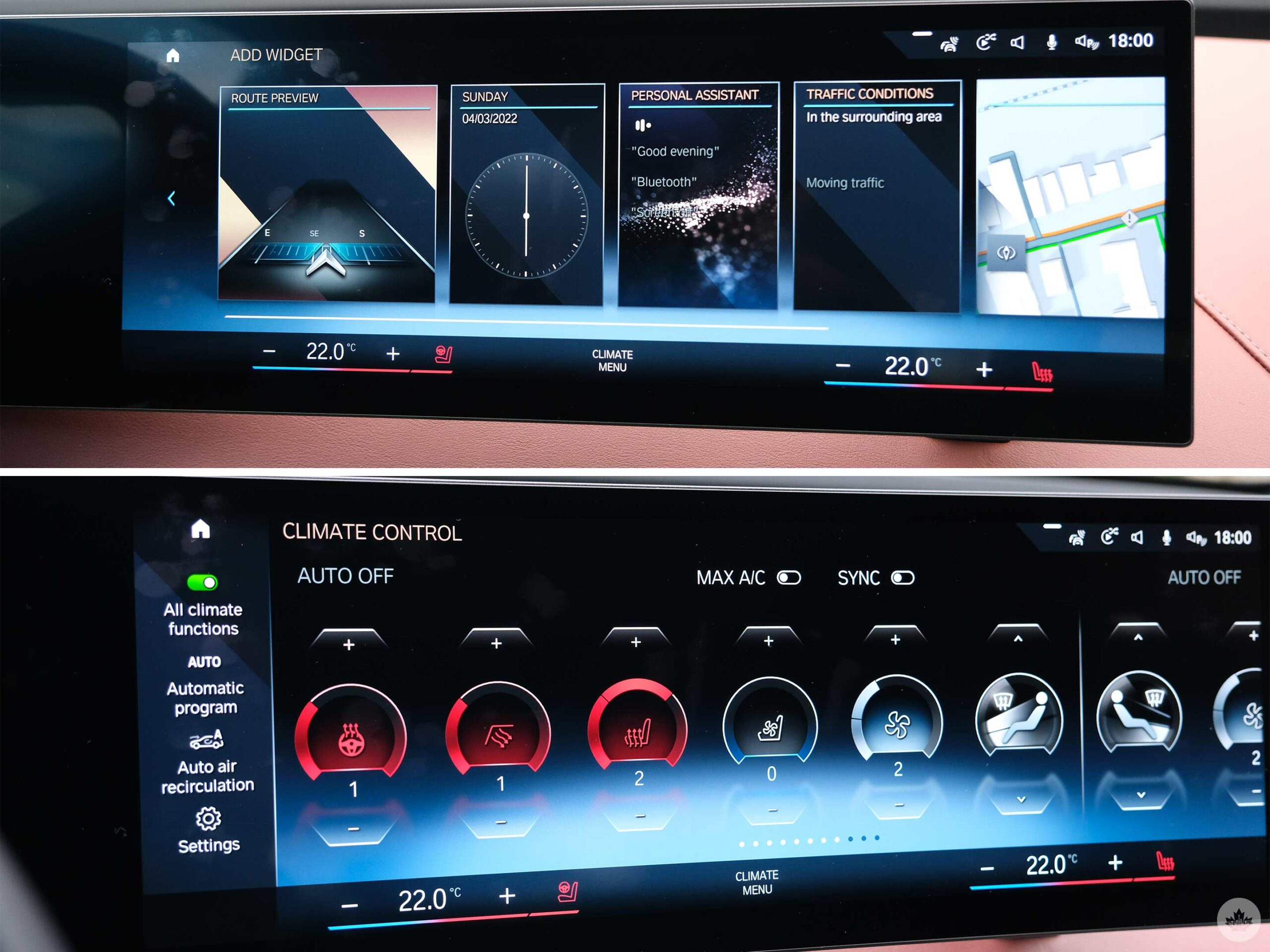 This menu is a long row of controls for everything from heated seats to the fan power. It’s easy to use and makes sense. The roundedness of the icons does feel a little out of place since a lot of the other aspects of the infotainment are in square boxes with angular designs, but that’s a tiny nitpick on an otherwise simple formula.

Finally, I will say that I liked the vertical widgets of apps that BMW keeps on the homepage of its infotainment, but to me, as someone who mainly uses Google Maps and never in-car navigation software, it was a bit empty and void of much useful info for me. 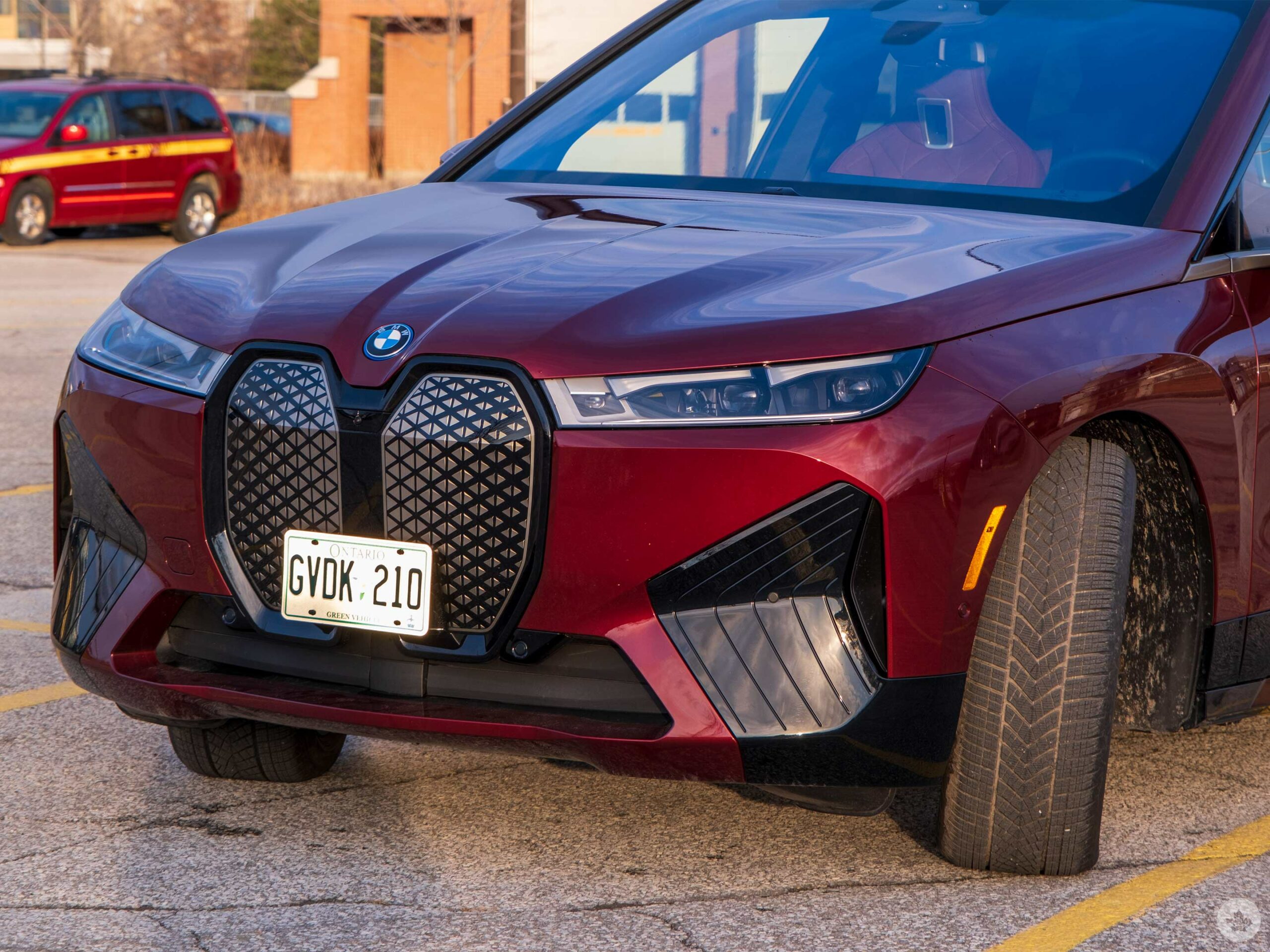 The downside of the iX’s massive battery is that it takes a long time to fill it back up. The car can only charge at a maximum of 200kW at its fastest. This takes around an hour to top up. However, if you have the lower-cost BMW XDrive 40 trim, it only tops up at 150kW.

With a 240-volt home charger, you can top the more expensive model up in around 12 hours, according to BMW’s website. However, on the night that I left mine on a level-2 charger, it only got as far as 79 percent in 12 hours. The XDrive 40 has a smaller battery, so it should top up a few hours faster.

I’d blame the experience more on the charger, but I’ve left it in to illustrate that unless you have a really well laid out charging regime, you might end up waiting a long time to top up your battery if you haven’t planned your route accordingly.

That being said, since the iX has such an impressive range, you can make it further and drive longer without needing to charge, so that does take a lot of the stress off. 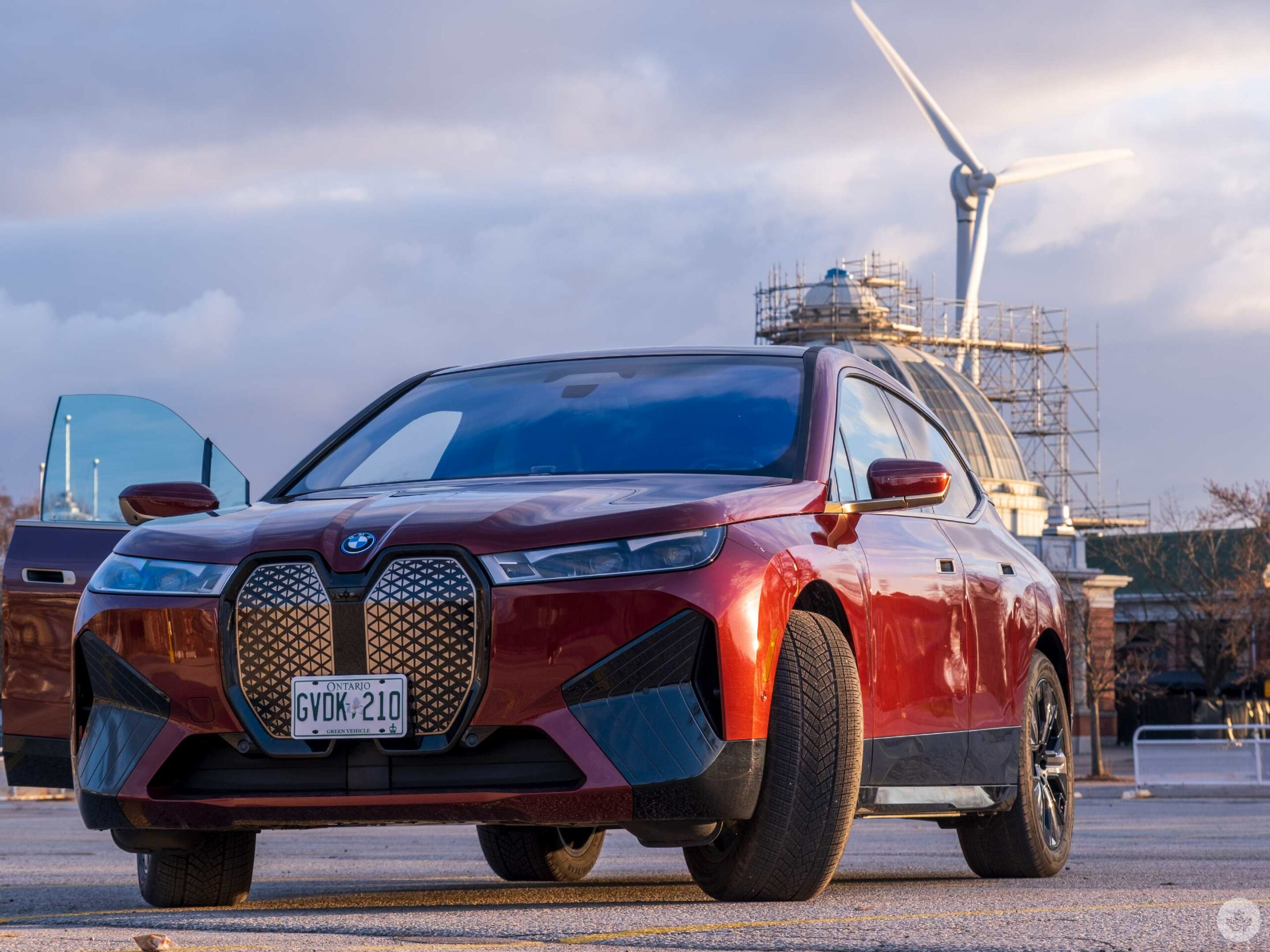